Spider Monkey at Teotihuacan May Have Been a Maya Gift 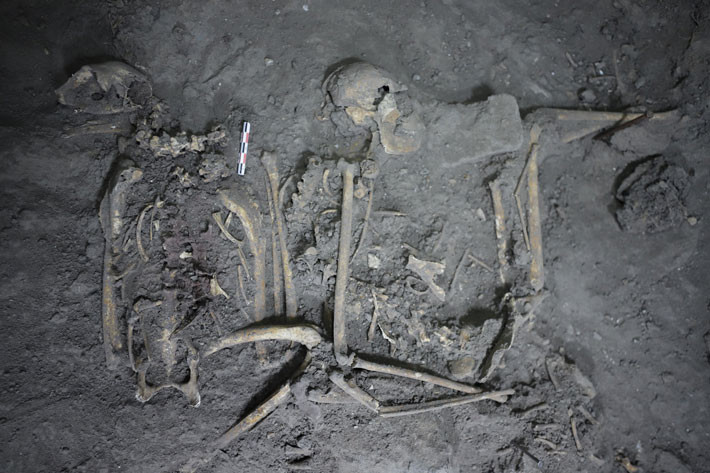 RIVERSIDE, CALIFORNIA—According to a statement released by the University of California, Riverside, the 1,700-year-old remains of a female spider monkey have been found in Mexico at Teotihuacan’s Plaza of Columns Complex, along with the remains of additional sacrificed animals, including a golden eagle and several rattlesnakes; Maya-style mural fragments; and more than 14,000 fragments of ceramics, which suggest a great feast had taken place. Figurines made of jade from Guatemala’s Motagua Valley, objects made from shells, and obsidian blades and projectile points were also recovered at the site. Nawa Sugiyama of the University of California, Riverside suggests that the primate had been a gift from Maya diplomats to the leaders of Teotihuacan. Analysis of the monkey’s bones indicates that she was between the ages of five and eight at the time of death, and had eaten a diet that included maize and chili peppers for at least two years while in captivity. While in the wild, the spider monkey had lived in a humid environment and ate mostly plants and roots. Read the original scholarly article about this research in Proceedings of the National Academy of Sciences of the United States of America. To read about the city's breeding of rabbits for food, fur, and other products, go to "The Rabbit Farms of Teotihuacán."