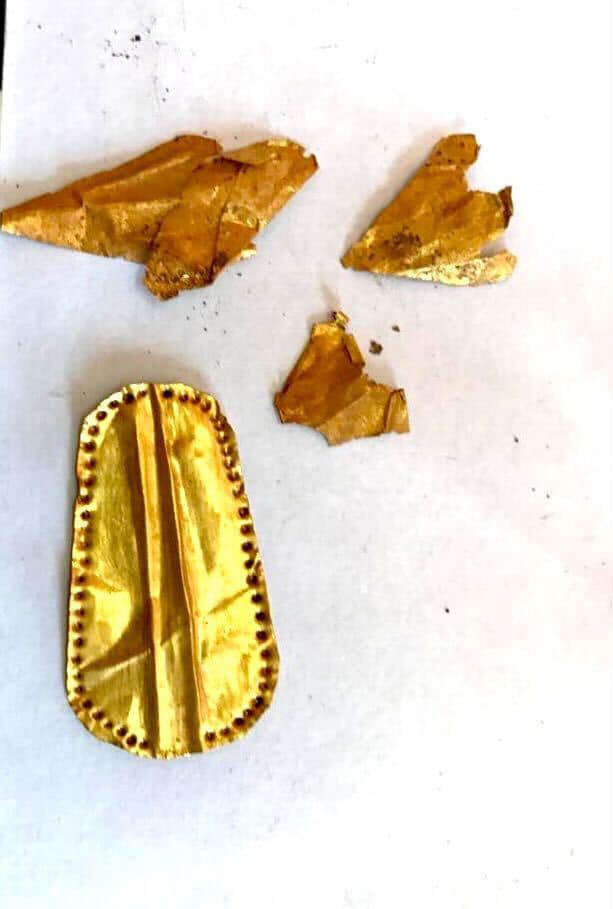 CAIRO, EGYPT—According to an Ahram Online report, poorly preserved mummies equipped with golden tongues have been discovered in the Quweisna necropolis, which is located in northern Egypt’s central Nile Delta, by a team of Egyptian archaeologists. Pottery, golden sheets shaped as scarabs and lotus flowers, amulets, scarabs, and vessels made of stone were also uncovered, said Mustafa Waziri of Egypt’s Supreme Council of Antiquities. Some of the human remains had also been covered with golden sheets, or placed in wooden coffins bearing traces of copper, he added. This section of the Quweisna necropolis was constructed with mudbricks and consists of a vaulted main hall with three vaulted burial chambers, and a burial shaft with two side chambers made of mudbricks, explained Ayman Ashmawi of the Egyptian Antiquities Sector. “Early studies of the burials, the mummies, and the funerary collection found indicate that this necropolis was used during three different periods: the late ancient Egyptian, the Ptolemaic, and part of the Roman period,” Ashmawi said. To read about mummies with tongue-shaped gold amulets placed in their mouths, go to "Around the World: Egypt."