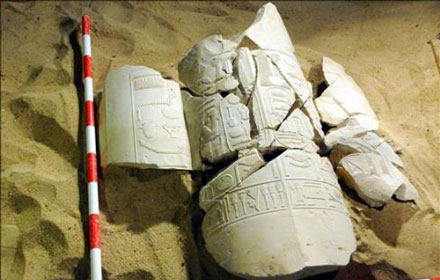 LUXOR, EGYPT—An excavation by a team of Spanish and Egyptian archaeologists has revealed hieroglyphs carved into the columns of a mausoleum of an 18th Dynasty minister. The rulers are shown in the same space, one following the other, and their names are shown beside each other. This would suggest that Amenhotep III and Amenhotep IV, otherwise known as Akhenaten, ruled together for nine or ten years of the 39 years that Amenhotep III sat on the throne. “There is nothing similar in Pharaonic history,” Martin Valentin, Field and Scientific Director of the Spanish Mission of the Asasif Project, told Hispanically Speaking News. The reign of Amenhotep III is known for its stability and prosperity, and it had been thought that his son broke away from tradition when he ascended to the throne—changing his name to Akhenaten and promoting the worship of the sun god Aten.