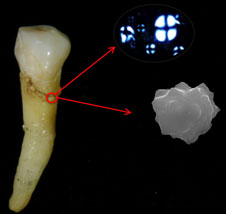 DUNEDIN, NEW ZEALAND—Monica Tromp of the University of Otago and John Dudgeon of Idaho State University have re-examined the plant microfossils found in dental calculus of the Polynesians who lived on Rapa Nui, or Easter Island, in the years before European contact. Their previous research had suggested that palm may have been a staple plant food for the population, but other evidence indicates that the palm went extinct shortly after the island was colonized. For the new study, the researchers identified starch grains in the calculus removed from 30 teeth. All of the identified starch grains were consistent with modern sweet potato. None of the grains were similar to banana, taro, or yam, which are all thought to have been part of the islanders’ diet. They also tested the skins of modern sweet potatoes grown in soil similar to Easter Island’s, and found that the skins of the potatoes incorporated palm phytoliths from the soil. “So this actually bolsters the case for sweet potato as a staple and important plant food source for the Islanders from the time the island was first colonized,” said Tromp. “This research also shows that the plant foods you find evidence for in dental calculus can come from the environment that foods are grown in and not necessarily from the food itself—this finding has the potential to impact dental calculus studies worldwide,” she explained. For more on a similar study, see "Dental Calculus Offers Direct Evidence of Milk-Drinking."