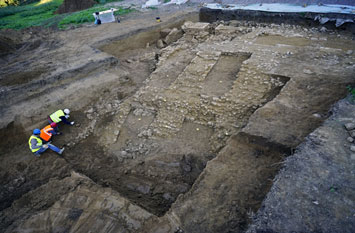 TUSCANY, ITALY—A Roman amphitheater thought to date to the first century A.D. has been discovered in the town of Volterra, once a well-known Etruscan city that fell under Roman rule. “It’s puzzling that no historical account records the existence of such an imposing amphitheater. Possibly it was abandoned at a certain time and gradually covered by vegetation,” archaeologist Elena Sorge of the Tuscan Superintendency told Discovery News. “This amphitheater was quite large. Our survey dig revealed three orders of seats that could accommodate about 10,000 people. They were entertained by gladiator fights and wild beast baiting,” Sorge explained. A survey conducted with ground-penetrating radar by Carlo Battini of the University of Genoa indicates that much of the amphitheater, which was constructed of stone in the same manner as the nearby theater, is under 20 to 32 feet of dirt. To read about a recent Etruscan discovery, go to "The Tomb of the Silver Hands."