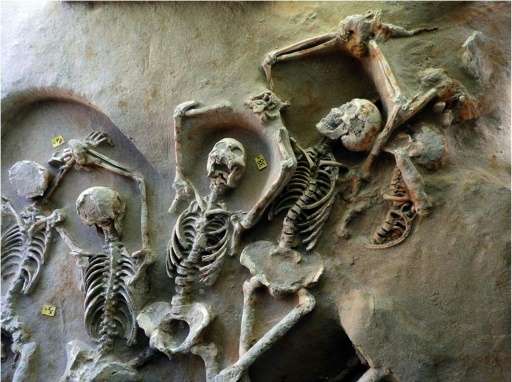 ATHENS, GREECE—Regional archaeological services director Stella Chryssoulaki of the Greek Ministry of Culture announced that archaeologists discovered two mass graves containing the lined-up skeletons of 80 men in an ancient cemetery at a construction site near Athens. The men are thought to have been young and healthy, due to the condition of their teeth. The hands of 36 of the men had been bound with iron. Some of them had been buried on their backs, while others were on their stomachs. Two vases found with the skeletons date to the mid seventh century B.C., “a period of great political turmoil in the region,” according to the Ministry statement reported by the AFP. Greece’s Central Archaeological Council is planning further investigations of the site. For more, go to "Greece's Biggest Tomb," which was one of ARCHAEOLOGY's Top 10 Discoveries of 2014.