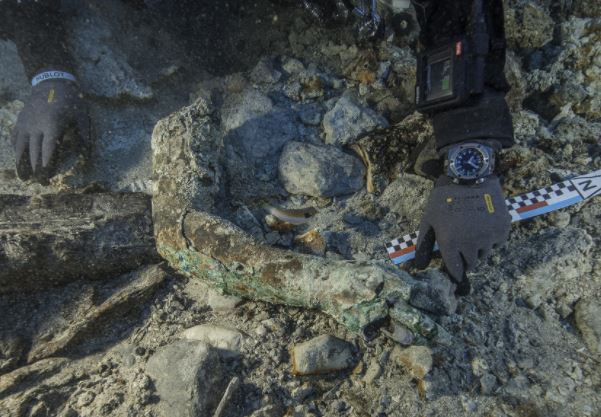 ANTIKYTHERA, GREECE—According to a report in The Guardian, pieces of at least seven different bronze sculptures have been recovered at the site of the Antikythera shipwreck, made famous by the discovery of the Antikythera mechanism in 1901. Brendan Foley of Lund University said the pieces were found among large boulders that may have tumbled over the wreckage during an earthquake in the fourth century A.D. with an underwater metal detector. Recovering any possible additional statue pieces will require moving the boulders, some of which weigh several tons, or cracking them open. The team also discovered a slab of red marble, a silver tankard, pieces of wood from the ship’s frame, and a human bone. A bronze disc about the size of the geared wheels in the Antikythera mechanism was also found this year. Preliminary X-rays of the object revealed an image of a bull, but no cogs, so it may have been a decorative item. Investigation of the deepwater site will continue next year. “We’re down in the hold of the ship now, so all the other things that would have been carried should be down there as well,” Foley said. To read about the discovery of a skeleton discovered at the same site, go to “Antikythera Man.”