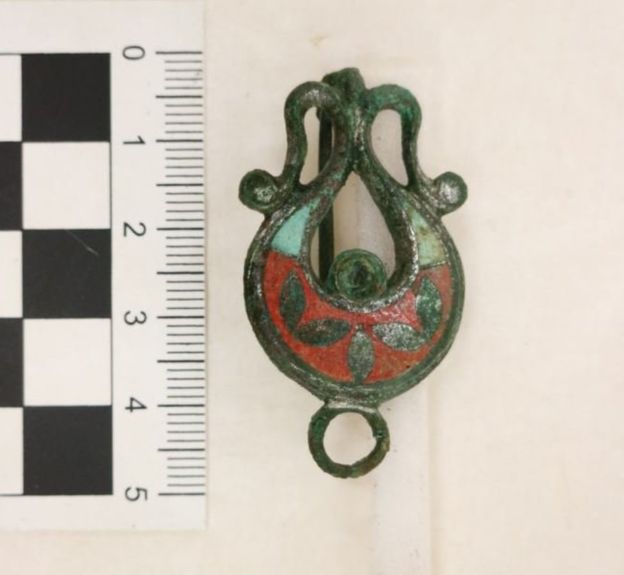 COVENTRY, ENGLAND—BBC News reports that artifacts and graves dating to the Roman and Anglo-Saxon periods were unearthed ahead of a construction project in England’s West Midlands. In the cremation burial of a young Roman girl, a team of archaeologists led by Nigel Page of Warwickshire County Council found four brooches placed in a small pile covered with a polished mirror. A ring bearing an image of a cicada, an insect associated with immortality, and a hair pin had also been placed in the jewelry pile. A vessel crafted in what is now northern France or Belgium was recovered from one of a dozen Anglo-Saxon graves at the site. A shield, fragments of a knife blade in a leather sheath, and a crushed hanging bowl made of copper alloy were also uncovered from an Anglo-Saxon grave thought to hold the remains of a high-ranking officer. “The settlement at Baginton continued to flourish after the Romans left in the early fifth century,” Page explained. To read about Roman and Anglo-Saxon remains discovered during the A14 highway project in Cambridgeshire, go to "Letter from England: Building a Road Through History."