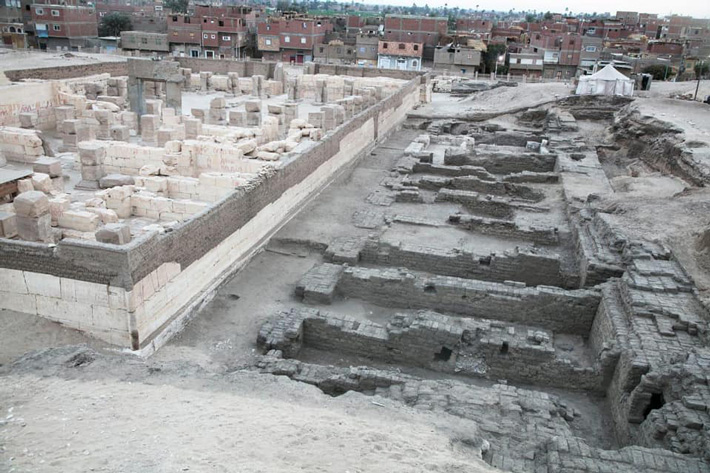 ABYDOS, EGYPT—According to an Ahram Online report, a team of researchers led by Sameh Iskander of New York University uncovered foundation deposits, ten large storerooms, and niches cut into the walls of the southwest corner of the Temple of Ramesses II in Abydos. Mostafa Waziri of the Supreme Council of Antiquities said that the foundation deposits, which include plaques inscribed with Ramesses II’s throne name, copper tool models, pottery, grindstones, and food offerings, were buried in 1279 B.C. when construction of the temple began. It had been previously thought that the temple was built by Seti I, the father of Ramesses II. “This discovery has changed the physical appearance of the Abydos landscape and shed considerable light on our understanding of the temple and its economy during the thirteenth century B.C.,” Iskander explained. The storerooms at the site held grain and other temple provisions, offerings, and equipment, and were roofed with vaulted brick ceilings. In the niches, the researchers found the heads and bones of 12 sacrificial bulls dated to the Ptolemaic period. “This is a testimony to the vivid memory of Ramesses II in the Egyptian mind 1,000 years after his reign,” Iskander said. A complete bull skeleton was also found buried under the temple floor. To read about analysis of a pair of legs found in the tomb of Ramesses II's wife Nefertari, go to "Royal Gams."