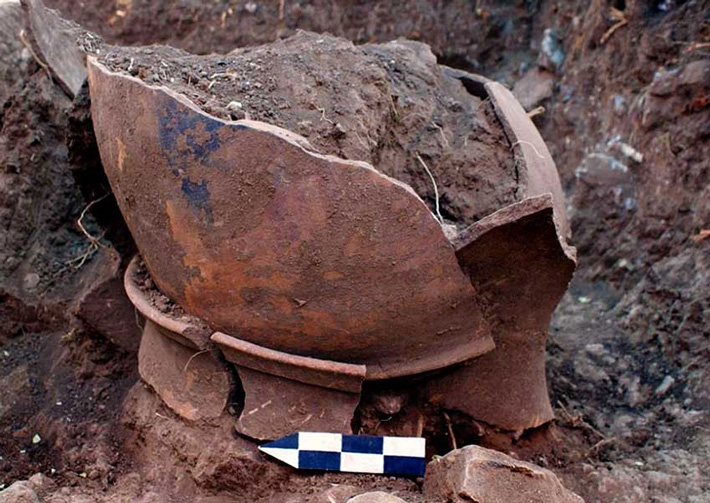 JALISCO, MEXICO—Mexico News Daily reports that traces of tejuino, a type of beer made from corn, have been detected in the largest of six large urns unearthed in 2008 near the Guachimontones circular pyramids in central-western Mexico. The urns are estimated to be between 500 and 700 years old. Archaeologist Rodrigo Esparza López of the College of Michoacán said chemical analysis of the residues revealed boiled starches from maize and sweet potato, which may have been added to the corn beverage for their high sugar content in order to boost fermentation. The other jars may also have been used to ferment, cook, and store tejuino, or store water or grain, he added. The large vessel was reassembled by students at Mexico’s Western School of Conservation and Restoration (ECRO) over the past 12 years. They found that about 85 percent of it had been preserved, and it weighed about 220 pounds. Full of liquid, the vessel would have weighed more than 400 pounds. Esparaza said each home may have had several jars of this size. To read about early beer brewing in Israel 13,000 years ago, go to "The First Bakers," one of ARCHAEOLOGY's Top 10 Discoveries of 2018.