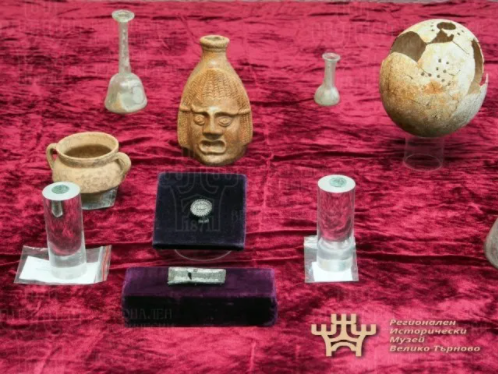 LYASKOVETS, BULGARIA—Archaeology in Bulgaria reports that archaeologist Kalin Chakarov of the Regional Museum of History in Veliko Tarnovo and his team conducted a rescue excavation of a Thracian burial mound in north-central Bulgaria. The mound held 19 graves. The cremated dead had been placed in chambers with offerings and personal belongings. The grave in the center of the mound held parts of a vessel made from an ostrich eggshell that was probably imported from Africa or Asia; a gold-plated silver brooch, or fibula, bearing an image of the deity known as the Thracian Horseman; and a ceramic jug decorated with a sculpture resembling a theatrical face mask. “The fibula is extremely expensive,” said museum director Ivan Tsarov. “It was custom-made, probably in the atelier of some Aegean craftsman. This is the first such adornment with a depiction of the Thracian Horseman.” The team members also recovered a warrior’s belt decorated with silver, two gold earrings, pottery, vessels for collecting tears at burial rituals, copper and bronze coins dating to the first half of the third century A.D., and one worn coin dated to the beginning of the second century A.D. To read about an anthropomorphic oil vessel found in the grave of a Thracian man, go to "Bath Buddy."