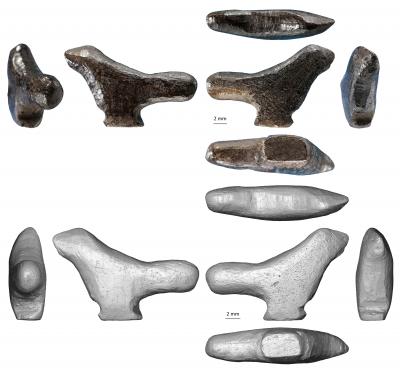 LINGJING, CHINA—Courthouse News reports that a bird figurine carved from a heat-blackened piece of animal bone radiocarbon dated to 13,500 years ago has been identified at the site of Lingjing in central China. Zhanyang Li of Shandong University and his colleagues found the artifact in a spoil heap from a well dug at the site in 1958, along with quartz tools, pottery, a pendant made from an ostrich eggshell, animal remains, and another piece of worked bone. Microscopic analysis revealed that the artist used a variety of stone tools and four techniques to create the one-half inch tall representation of a perching songbird standing on a sturdy base. No Neolithic or Bronze Age artifacts were found in the spoil heap, indicating that it is unlikely that the artifact originated in another layer of soil at Lingjing, which dates back more than 100,000 years. Team member Luc Doyon of the University of Montreal added that the previously oldest-known carving of a bird in China is about 5,000 years old. To read about 125,000-year-old engravings on animal bones that were recently found at Lingjing, go to "World Roundup: China."