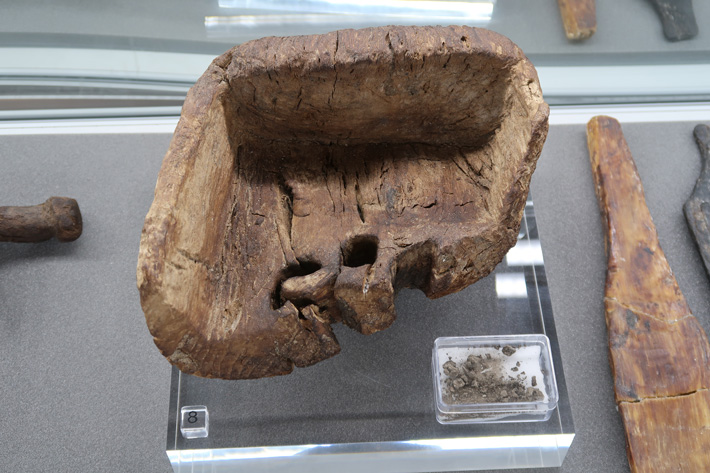 PERTHSHIRE, SCOTLAND—According to a report in The Scotsman, researchers have recovered a 2,500-year-old wooden dish from Loch Tay, a freshwater lake in Scotland’s central highlands. Chisel marks are still visible on the dish, which is thought to have fallen into the water with one of the at least 17 crannogs, or Iron Age wooden houses that once stood on stilts at the site. “Because of the fantastic anaerobic conditions, where there is very little light, oxygen, or bacteria to break down anything organic, you get this type of sealed environment,” explained archaeologist Rich Hiden of the Scottish Crannog Centre. Analysis of matter on the dish, he added, detected dairy fat—perhaps butter made of cow’s milk, while holes in the bottom of the dish suggest it was used in the churning process to separate newly formed butter from buttermilk. In addition to keeping dairy animals, the people who lived in the crannogs are known to have grown barley, spelt, and emmer wheat. For more on crannogs, go to "Worlds Apart."