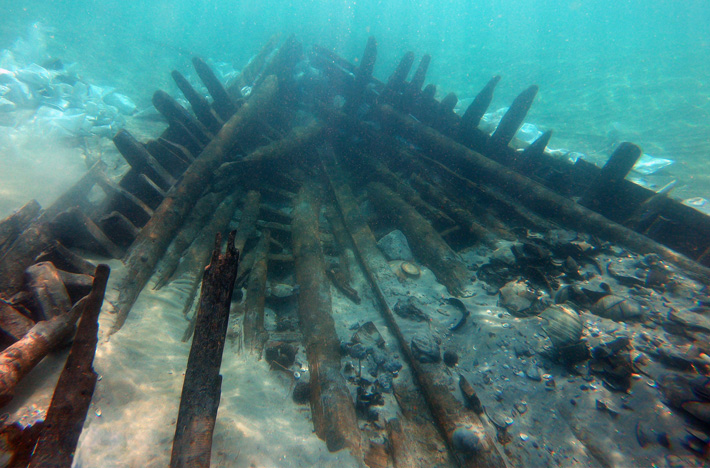 HAIFA, ISRAEL—Exploration of a 1,300-year-old shipwreck just off the coast of Israel is offering new insights into life in the region at a time of transition from Byzantine to Islamic rule, according to a report from The Jerusalem Post. Researchers from the University of Haifa’s Leon Recanati Institute for Maritime Studies began excavating the wreck in 2016. They have found that its cargo included more than 100 amphoras filled with products including olives, dates, figs, fish, pine nuts, grapes, and raisins. The researchers believe the ship made stops in Cyprus, Egypt, and possibly at a port along the coast of Israel before it sank. The size and richness of its cargo appear to contradict the generally accepted belief that commerce in the eastern Mediterranean was limited during the transition from Byzantine to Islamic rule in the seventh to eighth century A.D. The excavations have also turned up several Christian crosses and the name of Allah written in Arabic. “We do not know whether the crew was Christian or Muslim, but we found traces of both religions,” said University of Haifa archaeologist Deborah Cvikel. Given that the wreck occurred close to shore and that no human bones have been found, the researchers believe everyone on board survived the ship’s sinking. To read in-depth about a Byzantine shipwreck off the coast of Sicily, go to “Shipping Stone.”