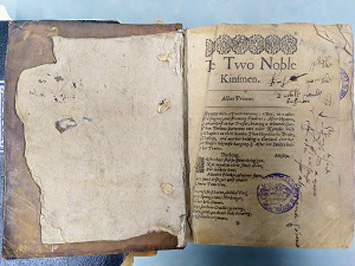 MADRID, SPAIN—BBC News reports that John Stone of the University of Barcelona has found a 1634 printing of The Two Noble Kinsmen, a play written by William Shakespeare with John Fletcher, a house playwright for the theater group the King’s Men. The play appears in a book of English plays held at the Royal Scots College, which is now located in Salamanca, Spain. In the seventeenth century, the college was located in Madrid, and was a rare source of English literature for Spanish intellectuals. “By the 1630s English plays were increasingly associated with elite culture,” Stone explained. Based on Geoffrey Chaucer’s fourteenth-century poem The Knight’s Tale, Two Noble Kinsmen was written around 1613 or 1614, and is thought to have been one of Shakespeare’s last works before he died in 1616. “It is likely these plays arrived as part of some student’s personal library or at the request of the rector of the Royal Scots College, Hugh Semple, who was friends with the Spanish playwright Lope de Vega and had more plays in his personal library,” Stone said. The book remains in its original leather binding, he added. To read about the remains of an Elizabethan theater unearthed earlier this year in London, go to "Around the World: England."