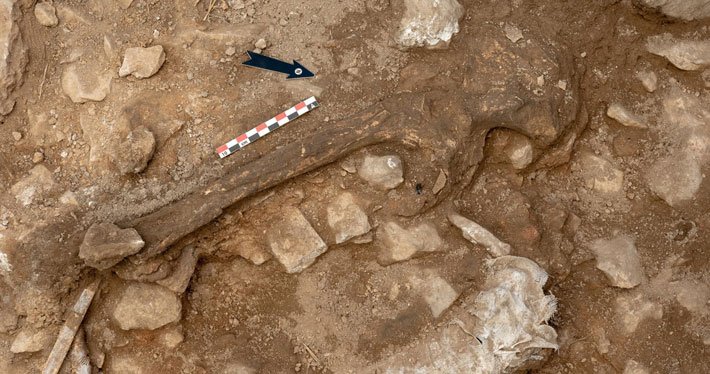 BURGOS, SPAIN—According to a statement released by Spain’s National Research Center on Human Evolution (CENIEH), sediments from a modern human burial in northeastern Spain’s Cova Gran de Santa Linya have been radiocarbon dated to 14,000 years ago. The remains include a pelvis, thought to have belonged to a woman; two femurs, one of which is still attached to the pelvis; other arm and leg bones; and bones from the hands and feet. The skull, vertebrae, and ribs were poorly preserved. Dubbed “Linya, the La Noguera woman,” the remains are the first to have been recovered from the site, where artifacts ranging in age from 45,000 to 4,000 years old have been found, explained research team member Alfonso Benito Calvo. The bones were discovered in a natural receptacle formed when several large blocks fell from the roof of the cave. Analysis of soil recovered from the receptacle could reveal if the body was covered with animal skins or plants, Calvo added. To read about the 18,700-year-old remains of a woman discovered in a cave in northern Spain, go to "The Red Lady of El Mirón."