The most celebrated archaeology story in recent memory is the 2013 confirmation that bones thought to belong to King Richard III, found beneath a parking lot in Leicester, were, in fact, those of the infamous English monarch. Naturally, it leads our Top 10 Discoveries of 2013.

But a discovery needn’t involve a historical figure whose life was dramatized by no less a personage than Shakespeare in order to make the cut. In archaeological hot spots such as Egypt and Rome, the news was every bit as exciting. On the coast of the Red Sea, archaeologists uncovered Egpyt’s oldest port. And just 20 miles outside Rome, the discovery of that city’s first monumental architecture—the iconic building style so tightly associated with the ancient Romans—was announced.

Elsewhere, evidence for cannibalism at Jamestown revealed what a perilous enterprise the colonization of the New World was, and on what tenuous ground the fate of the American colonies rested. In northwestern Cambodia, aerial mapping of the environs of Angkor Wat has changed our understanding of the growth and nature of the ancient Khmer Empire. And, in central Ireland, a part of the world known for its well-preserved ancient human remains, the oldest bog body was found, dating back some 4,000 years.

This year’s discoveries span millennia, come to us from far-flung locales, and offer what archaeology can always be counted on to deliver: a close look at the astounding diversity and range of human innovation and creativity. The oldest among these finds, skulls unearthed in Georgia, may alter scientists’ understanding of our earliest ancestors—long before civilization emerged or kings such as Richard III ruled. 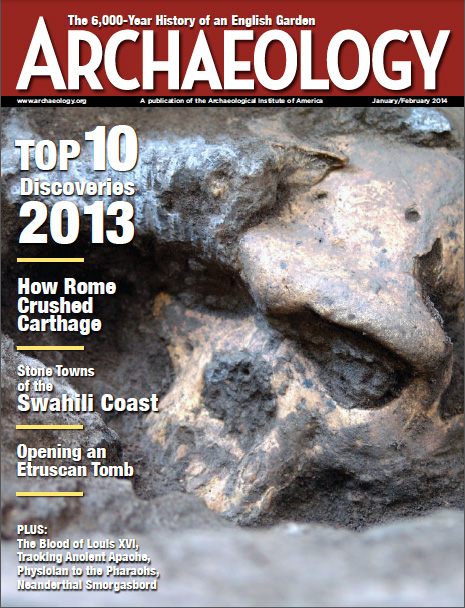 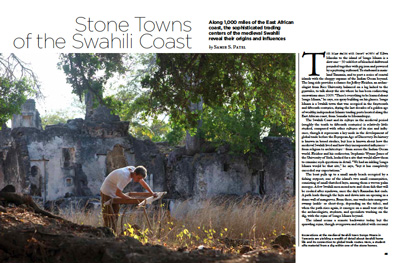 Stone Towns of the Swahili Coast
Along 2,000 miles of the East African coast, the sophisticated trading centers of the medieval Swahili reveal their origins and influences