Third quarter of the 1st to early 2nd century A.D. 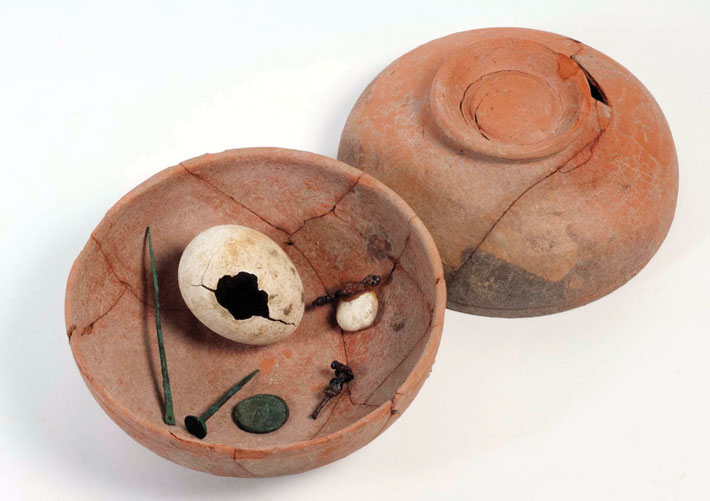 It was a dangerous year for the inhabitants of Sardis. In A.D. 17 an earthquake, which the ancient historian Pliny called “the greatest earthquake in human memory,” destroyed the great city, once the capital of the Lydian Empire and, at the time, a Roman imperial provincial capital. It took the Sardians decades to rebuild—but they weren’t taking any chances. Members of Harvard University’s Sardis project recently discovered a simple, locally produced bowl, with a similar bowl used as a cover, that had been buried under the floor of a domestic or public space sometime after A.D. 65. Inside the bowl was a collection of artifacts that project archaeologist Elizabeth DeRidder Raubolt of the University of Missouri describes as having been used for rituals of “protective magic.” These included an eggshell, which she describes as “about the size of medium organic egg, not the jumbo or extra large ones,” as well as a bronze needle perhaps used for piercing the eggshell, a pebble, iron implements, a bronze nail, and a bronze coin.

As is perhaps appropriate in the city that Herodotus tells us was the first to mint coinage in the seventh century B.C., it is the coin that provides the most compelling evidence of the Sardians’ desire to avoid another disastrous event. The bronze coin, which dates to between A.D. 62 and 65, depicts the emperor Nero on the obverse, and, on the reverse, an image of the god Zeus Lydios, a native deity of storms and thunder. “Clearly the Sardians chose this coin specifically as a plea for there to be no more earthquakes,” says DeRidder Raubolt.