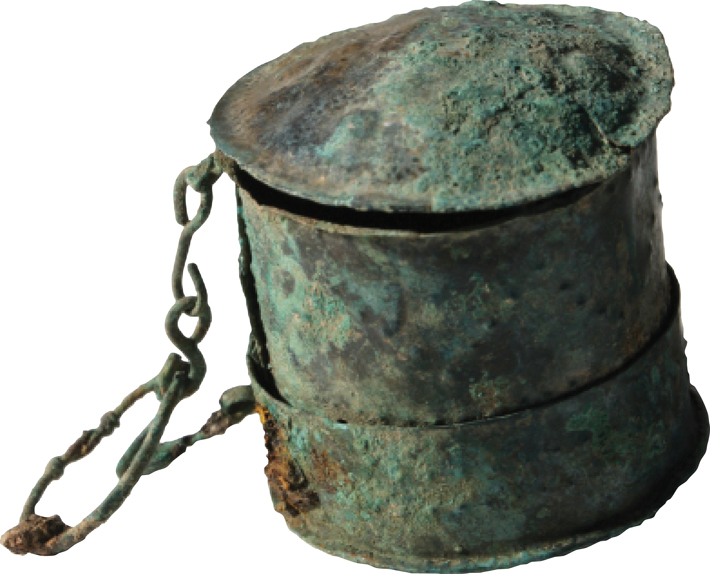 Many people have keepsake boxes in which they safeguard personal items accumulated during their lives—a few faded family photos, a folded love letter from a summer romance, a single earring that was once part of a favorite pair. In a woman’s grave in an Anglo-Saxon cemetery in Tidworth in southern England, archaeologists have discovered a copper alloy box that perhaps served a similar purpose, even after her death.

The small box is made of two cylinders that form the top and bottom and may have been soldered together. This type of container, sometimes called a “workbox,” has been found at sites across England, but only three have been uncovered in Wiltshire: one in the 1850s and one just two weeks before the example from Tidworth. “These recent finds are the first workboxes excavated in this region using scientific methodology,” says archaeologist and project manager Bruce Eaton of Wessex Archaeology. Because some workboxes have been found decorated with crosses, it has been suggested that they may have been Christian reliquaries. The Tidworth box is decorated on all of its surfaces with repoussé patterns—concentric rings, chevrons, and lines—all of which were made using rows of dots, but none of them are obviously Christian symbols. A more prosaic conclusion is that workboxes may have been used to store small personal items, explains Eaton. “We now have a golden opportunity to examine the artifact’s contents under lab conditions, which will hopefully contribute to our understanding of the function of these types of boxes.”