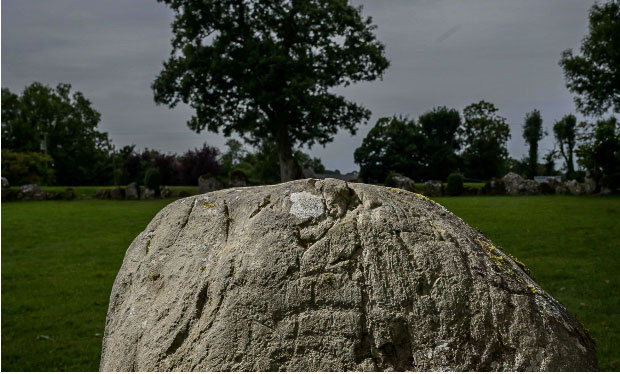 LIMERICK, IRELAND—Irish Central reports that new photographs of a stone at the north entrance passage to Grange Stone Circle, which consists of 113 stones set in a wide earthen bank, have revealed previously unseen carvings of concentric circles and arcs. Grange Stone Circle is located in western Ireland, near horseshoe-shaped Lough Gur, prehistoric crannogs, and ring forts. “The carvings are quite like those at passage tombs in the North and East of the country, such as Knowth and Newgrange, but there is only a single carved stone of this kind in Munster or Connaught,” commented Elizabeth Shee Twohig, who is now retired from University College, Cork. She thinks the stone may have been carved around 3000 B.C., when the banked enclosure at Grange Stone Circle was built, and later incorporated into the stone circle. To read about the people buried in the 5,500-year-old tomb of Newgrange, go to "Around the World: Ireland."