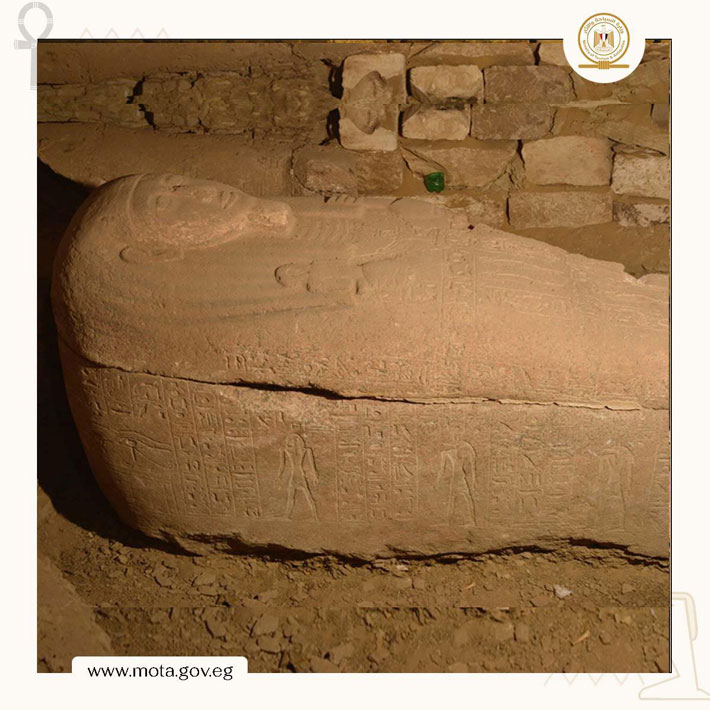 CAIRO, EGYPT—Ahram Online reports that a team of researchers led by Ola El Aguizy of Cairo University has recovered a sarcophagus that belonged to a man named Ptah-M-Wia at the Egyptian necropolis of Saqqara. The tomb of Ptah-M-Wia, who was a government official during the reign of Ramesses II (r. ca. 1279–1213 B.C.), was discovered last year. It consists of a 23-foot-long entrance shaft leading to a square room, and two additional empty rooms. An opening in the floor of the main room led to stairs and the burial chamber. The lid of the sarcophagus shows the deceased with a beard and crossed arms and holding the Djed symbol of Osiris and the Tyet symbol of Isis. The goddess Nut is also depicted with spread wings, along with the four sons of Horus. “The lid of the sarcophagus was broken diagonally, and the missing part was found in the corner of the chamber,” El Aguizy said. “The sarcophagus was empty except for some residue of tar from the mummification on the bottom of the sarcophagus.” Mostafa Waziri of the Supreme Council of Antiquities added that Ptah-M-Wia’s titles included royal scribe, great overseer of cattle in the temple of Ramesses II, and head of the treasury. To read about the discovery of Ptah-M-Wia's tomb, go to "The Treasurer's Tomb."