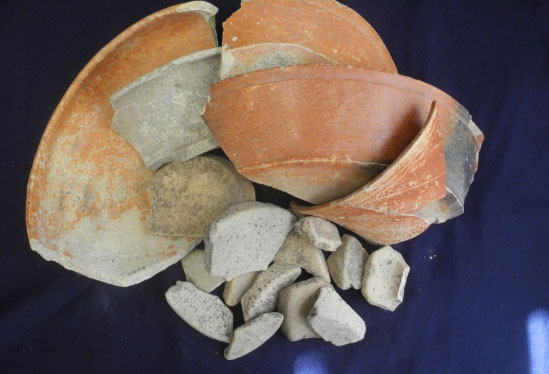 SANTA BARBARA, CALIFORNIA—Traces of cacao (Theobroma cacao) have been detected on pottery fragments recovered from different areas of the Maya site of El Pilar, which suggests that it was consumed at every level of society between A.D. 600 and 900, according to a Science News report. Cacao is used to produce chocolate, and in ancient Maya society was linked to Hun Hunahpu, the maize god. Anabel Ford of the University of California, Santa Barbara, and her colleagues found a chemical indicator for the presence of cacao on more than half of 54 fragments of jars, mixing bowls, serving plates, and possible drinking vessels unearthed in residential and ceremonial civic areas in the city center, the foothills, and upland areas of the ancient city, which is situated on the border between Guatemala and Belize. “Now we know that the rituals the elite depict with cacao were likely played out, like Thanksgiving, like any other ritual, by everyone,” Ford said. Researchers can next explore the question of who grew cacao and managed its distribution, she added. Read the original scholarly article about this research in Proceedings of the National Academy of Sciences of the United States of America. For more on Maya cultivation of cacao, go to "Around the World: Mexico."