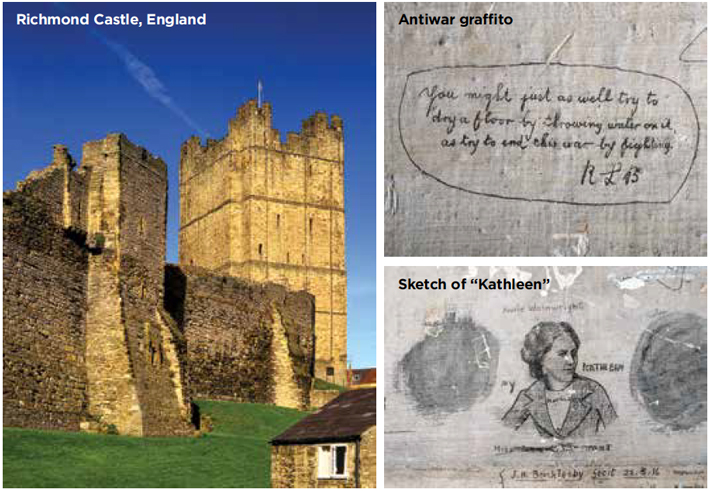 A new grant provided by England’s Heritage Lottery Fund will help preserve and document graffiti drawn by prisoners in North Yorkshire’s Richmond Castle during World War I. The imprisoned men were conscientious objectors who refused to serve in the British Army. In 1916, the British government passed the Military Service Act, which conscripted all unmarried men aged 18 to 41 into military service. The law stipulated that those who refused to enlist due to a conscientious objection could avoid combat, as long as they served within the Non-Combatant Corps. However, a small “absolutist” group of Methodists, Quakers, and socialists refused to participate in the war effort in any capacity, and were subsequently jailed in Richmond Castle. Known as the Richmond 16, these prisoners covered the walls of their cells with thousands of pencil-drawn images, political slogans, biblical quotes, and religious hymns. One statement reads, “You might just as well try to dry a floor by throwing water on it, as try to end this war by fighting.” Another states, “The working class of this country have no quarrel with the working class of Germany or any other country.”

After 100 years, the limewash and plaster walls have been heavily damaged by moisture, threatening the survival of the graffiti. “These graffiti are an important record of the voices of dissent during the First World War,” says Kate Mavor, English Heritage’s chief executive. “Now we can ensure that they survive for the next century and that the stories they tell are not lost.” 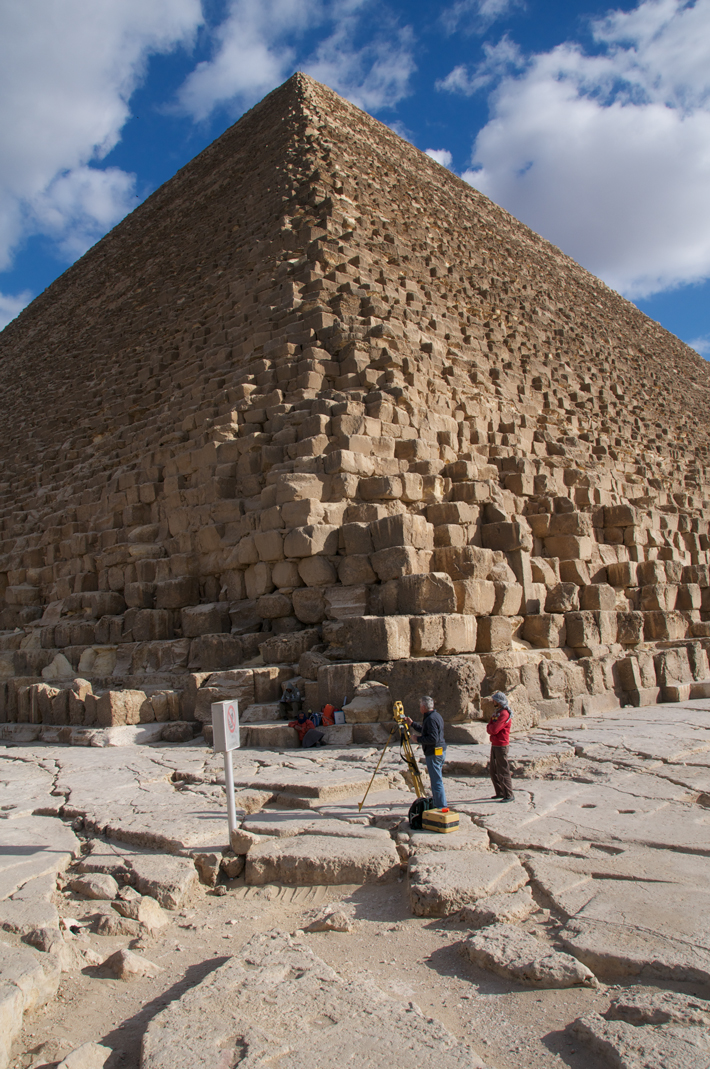 A new survey of the dimensions and orientation of ancient Egypt’s Great Pyramid of Giza has found that its builders attained a remarkable degree of accuracy despite limited technology. The 4,500-year-old pyramid is laid out with its sides running just one-fifteenth of a degree askew of the cardinal directions. In addition, each side of the pyramid’s original base measured around 756 feet long, but with the west side measuring about 2.9 inches longer than the east side, and the south side about 2.2 inches longer than the north side.

Estimating the pyramid’s initial dimensions is challenging given that it was originally clad in casing stones, almost all of which were repurposed as building materials several hundred years ago. Along the structure’s 3,000-plus-foot perimeter, only 177 feet of casing stones remain. To provide additional data, archaeologist Mark Lehner, director of Ancient Egypt Research Associates, looked for etched or cut lines at the pyramid’s base to indicate the location of its original edges. He found 84 such points, most of which are near the centers of the sides, with no evidence of the original corners remaining.

Glen Dash, an engineer and head of the Glen Dash Research Foundation, and his team used a statistical method known as linear regression analysis to estimate the full extent of the pyramid’s edges based on Lehner’s data points, resulting in the finding that the base is not quite square. “It is slightly a parallelogram,” says Dash, and this suggests its builders were better at measuring precise distances than they were at measuring precise right angles.

“We think they were simply using wood, rope, copper, and stone, and were still able to achieve this level of precision,” says Dash. These margins of error, he says, are similar to what one would find in most modern-day construction projects, although structures such as bridges and high rises are held to more exacting standards. 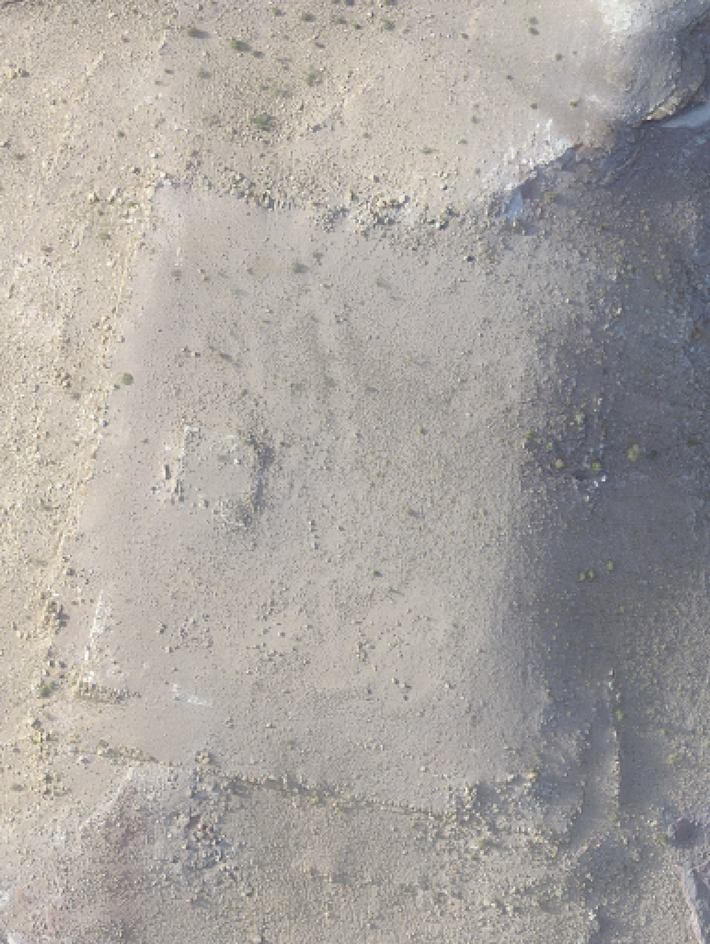 Satellite imagery and aerial photography have revealed several previously undocumented structures a little more than a mile southwest of Petra in Jordan, a major center of the Nabataean culture, famous for its elaborately decorated buildings carved into pink sandstone cliffs. The new survey, conducted by Sarah Parcak of the University of Alabama at Birmingham and Chris Tuttle of the Council of American Overseas Research Centers, shows clusters of previously unknown archaeological features, including remnants of two buildings and a trench that was dug by archaeologists in 1929 but whose location had been forgotten. Perhaps the most significant discovery is a 184-by-161-foot platform with a 28-foot-square building foundation atop it. Pottery sherds found there indicate that it was built before the second century B.C. Strangely, the platform is not in a place easily accessible from Petra’s city center. How it might have been used is a mystery. 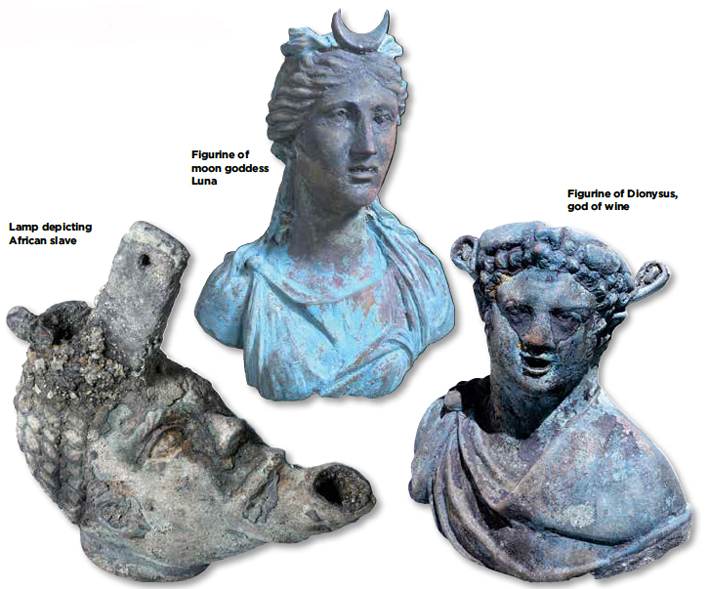 Treasures from the Roman era have emerged from the waters of the ancient Mediterranean harbor of Caesarea in Israel—the largest underwater find in the country in 30 years. The spectacular discovery includes a bronze lamp depicting the sun god Sol, a figurine of the moon goddess Luna, a lamp in the shape of the head of an African slave, fragments of three life-size bronze statues, and a figurine of the god of wine, Dionysus. The archaeologists also recovered two metallic lumps composed of thousands of coins bearing the images of the Roman emperors Constantine and Licinius, and holding the shape of the pottery vessels that once enclosed them. According to Jacob Sharvit, director of the Marine Archaeology Unit of the Israel Antiquities Authority, the cargo comes from what was probably a large merchant ship that sank around 1,600 years ago, and may have been slated to be recycled had the ship reached port. “The cargo gives us some important clues on commerce at that time,” he says. “We can date it to a short time after Constantine the Great won the battle against Maxentius, and made economic changes and declared Christianity the religion of the empire.” 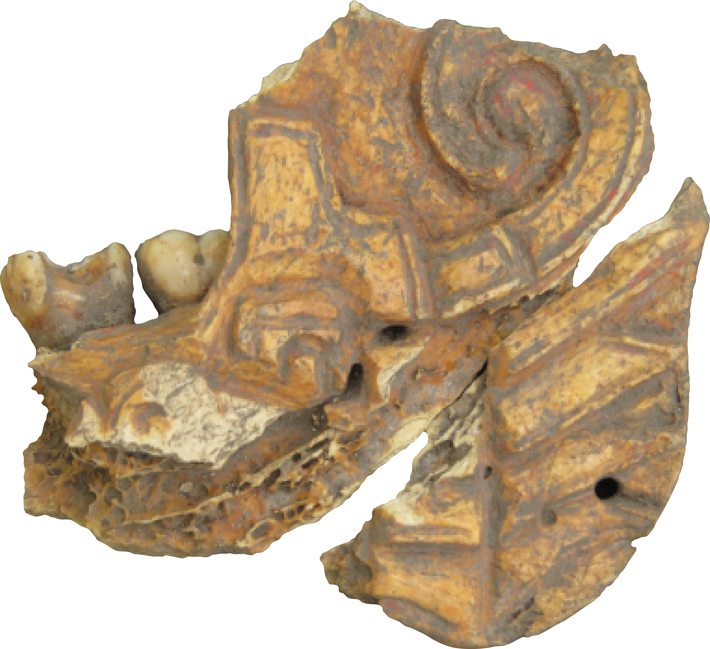 As early as 700 B.C., the Zapotec people of Mexico’s Oaxaca Valley were ruled by lords living in the city of Monte Albán who practiced public rituals that reinforced their vast power. But around A.D. 700, Monte Albán’s influence began to wane. Now archaeologists excavating at a wealthy residence at the site of Dainzú-Macuilxochitl have found evidence that, around that time, Zapotec nobles were practicing private rituals that celebrated their personal power. A team led by Field Museum archaeologist Ronald Faulseit unearthed a temple connected to a noble residence where they found two pierced human mandibles, one of them carved. The bones likely belonged to venerated ancestors and were worn as adornments during rituals that focused on the importance of hereditary power. “They were stressing their own noble lineage,” says Faulseit, “and emphasizing their political and economic independence.”