The First Enslaved Africans in Mexico 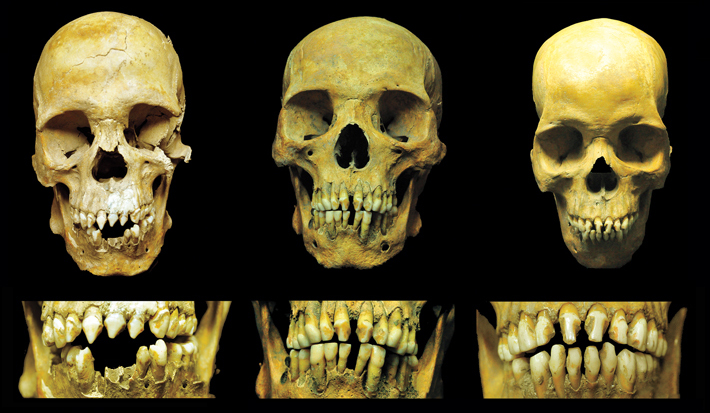 Details from the lives of three young men buried in a sixteenth-century mass grave in Mexico City have finally been brought to light by researchers who conducted isotope, genetic, and osteological analysis of their remains. Most notably, all three appear to have been born in West Africa. The men’s teeth were filed into shapes similar to those described by contemporaneous European travelers to West Africa and to dental modifications still performed by some groups in the region today. The skeletons were originally discovered in the 1980s, when subway construction revealed a colonial-era hospital for Indigenous people. “We know there were a large number of Africans who were abducted and transported to New Spain, but they did not generally live in Mexico City,” says archaeogeneticist Rodrigo Barquera of the Max Planck Institute for the Science of Human History. “That’s why it’s surprising to find these three individuals there.”

The skeletons also show evidence of strenuous physical labor and violent trauma. According to Barquera, the men were likely among the first generation of enslaved Africans brought to coastal Mexico in the 1520s. They may have toiled on a sugar plantation or in a mine before possibly becoming sick during an epidemic, which could explain their presence at the hospital. Isotope analysis of their teeth—which can determine where a person originated and what kind of food they consumed as a child—was consistent with West African ecosystems, and their DNA revealed that all three shared West African ancestry. However, the men weren’t related to each other, and the team couldn’t connect them to a specific population. It is possible, Barquera explains, that “after the community in Africa was raided, it disappeared from the historical record.”