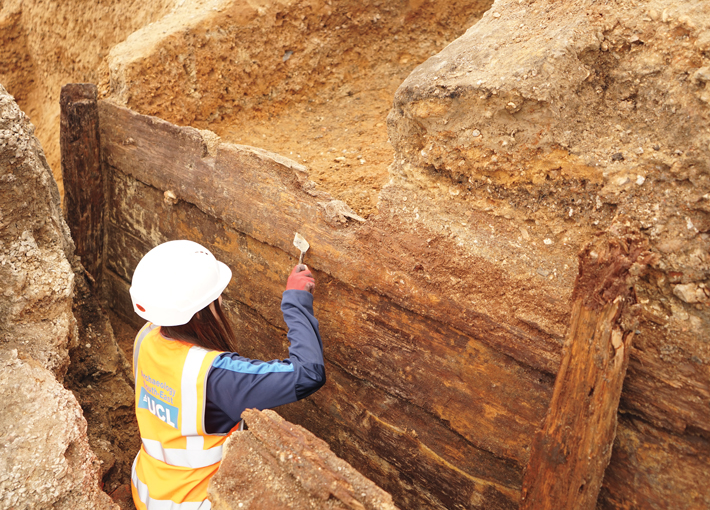 Archaeologists have uncovered what they believe are the remains of the Red Lion, the earliest purpose-built playhouse in England, which dates to the 1560s. Prior to this, playhouses were temporary creations, generally set up in the yards of inns or within great houses. The Red Lion was built under the direction of a grocer named John Brayne and until its discovery was known primarily from a pair of lawsuits he filed alleging shoddy workmanship by the carpenters who helped construct it. The later lawsuit, filed in 1569, mentions “a farme house called and knowen by the name of the Sygne of the Redd Lyon” that has seating and a stage measuring 40 feet north to south and 30 feet east to west.

Guided in part by land deeds that placed the Red Lion on the border of Whitechapel and Stepney Parishes in East London, a team from University College London’s Archaeology South-East unearthed a timber structure closely matching the dimensions noted in the lawsuit. The team also discovered a number of postholes, which they have dated to the mid-sixteenth century, surrounding the stage. The posts may have supported scaffolding or galleried seating. “Some had assumed that the Red Lion would be round or octagonal,” says lead archaeologist Stephen White. “But it actually looks very reminiscent of certain European theaters that were operating in the sixteenth century where you have these types of enclosed rectangular spaces.”

The Red Lion doesn’t appear to have enjoyed a very lengthy career as a playhouse, but it does seem to have served as a prototype for The Theatre in Shoreditch. Larger than the Red Lion, The Theatre was built by Brayne in 1576 in partnership with his brother-in-law, the actor and theatrical impresario James Burbage, and premiered a number of William Shakespeare’s early works. Burbage’s son Richard was a close friend of Shakespeare and played the lead role in many of his plays.