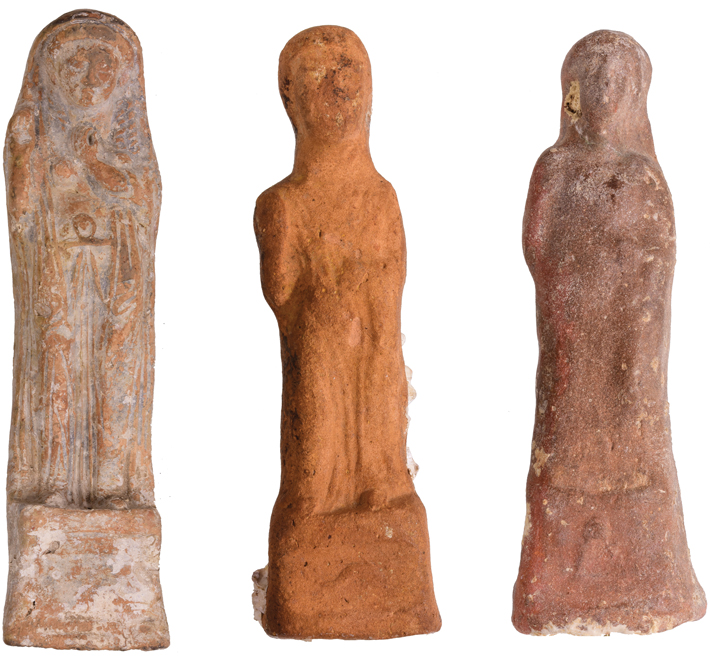 When hundreds of Phoenician ceramic figurines and vessels were first recovered from the seafloor off northern Israel almost 50 years ago, archaeologists interpreted the artifacts as cargo from a fifth-century B.C. shipwreck. Now, University of Haifa archaeologists Meir Edrey, Adi Erlich, and Assaf Yasur-Landau have reassessed the artifacts and determined that they were deliberately cast into the water, likely as part of a ritual that was repeated from the seventh through third centuries B.C.

Unlike other Phoenician caches of ritual statuettes, Edrey explains, all the figurines retrieved from the site depict women. “Some have protruding bellies or a hand placed over the abdomen, and others are even carrying children,” he says. “These attributes suggest that this assemblage was related to a specific cult connected with fertility and childbearing.” A few of the figurines portraying pregnant women bear the symbol of the Phoenician goddess Tanit. This symbol appears frequently in inscriptions at some central Mediterranean sites where infants were sacrificed in exchange for divine favor. Says Edrey, “These figurines could represent a local manifestation of this practice, in which they might have been used as a substitute for actual human infants who were often promised even before they were born.”