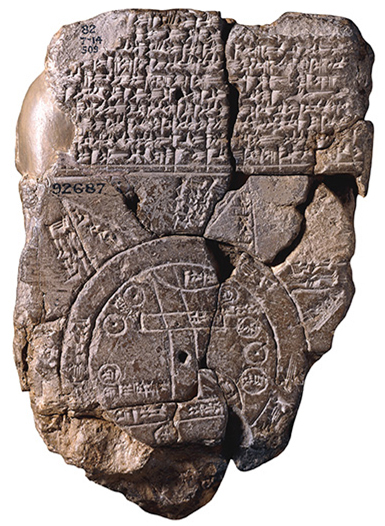 Cuneiform tablets were long used for making maps and plans of towns, rural areas, and houses, but rarely for anything larger or without commercial interest. A unique tablet, thought to have come from Sippar in present-day Iraq and dating to around the sixth century B.C., shows much more and reflects something of how ancient Babylonians saw themselves in the world. This Mesopotamian mappa mundi consists of a circular map surrounded by triangles, with explanatory text above and on the opposite face. The central circle shows the Babylonian realm, bisected by the Euphrates, which is straddled by Babylon itself. Several other geographical areas are labeled by name, and the continent is surrounded by a ring called the “ocean” or “Bitter River.” Beyond the boundary waters are seven or eight outlying regions or islands represented by triangles, of which portions of four survive. The text is largely concerned with these far-flung, perhaps mythological, places. One is described as a “place where the sun is not seen,” another as a place where “a winged bird cannot safely complete its journey.” Further descriptions speak of “ruined” cities and gods, and animals both fantastic (great sea-serpent, scorpion-man) and exotic (lion, monkey, chameleon).

According to Wayne Horowitz of the Hebrew University of Jerusalem, the tablet “reflects a general interest with distant areas during the first half of the first millennium, when the Assyrian and Babylonian Empires reached their greatest extents.”