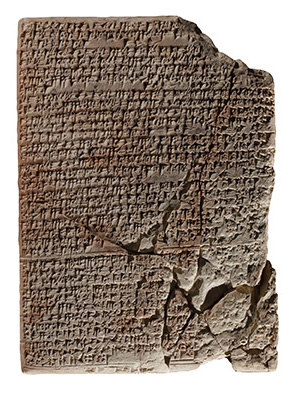 The earliest known recipes, by many centuries, are found on three tablets dating to the Old Babylonian period. Though seemingly simple, their minimal instructions could only have been followed by experienced chefs working for the highest echelons of society. This particular tablet features 25 recipes for stews and soups, both meat and vegetarian, including some directions—though no measurements or cooking times—for an amursanu-pigeon stew:

Split the pigeon in half—add other meat.

Prepare the water, add fat and salt to taste;

(first soak the herbs in milk).

When it is cooked, it is ready to serve.

With the exception of amursanu, which is probably a type of pigeon, and samidu, an unknown spice, the ingredients are certainly recognizable. But the dish would, in fact, be impossible to replicate, says Benjamin Foster, curator of the Yale Babylonian Collection. “People often think that because they can cook Arab or Persian food that they can make this stuff, but they don’t know how much regional cooking was changed by the Muslim conquests. If you cook these up using modern Near Eastern ingredients, it is pure fantasy—but often delicious.”