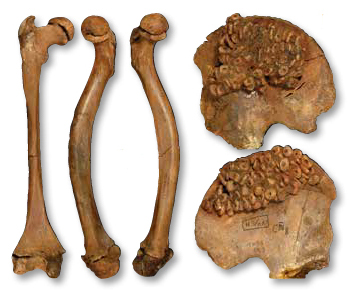 About 34,000 years ago the hunter-gatherers living on what are now the plains of Russia east of Moscow are known to have had a complex society with well-defined social roles. Erik Trinkaus of Washington University in St. Louis and Alexandra P. Buzhilova of Lomonosov Moscow State University have been reanalyzing burials from the site of Sunghir, which was excavated in the 1960s. In 2017 their most intriguing discoveries came from a grave containing two adolescent boys who had been buried head to head. This grave held more than 10,000 beads and 16 spears made of mammoth ivory, as well as several ivory disks and a pendant with a carving of a mammoth on it. Analysis of the skeletons shows that both boys suffered from physical abnormalities. One boy had severely shortened and bowed leg bones. The other seems to have suffered from a deformation around the mouth and muscle weakness. Both, though, were physically active. To Trinkaus the fact that these boys were buried with so many luxury goods confirms that they lived in a complex society where individuals were born into specific roles within the group. He says, “There is diversity in death, which should reflect diversity in the living.”