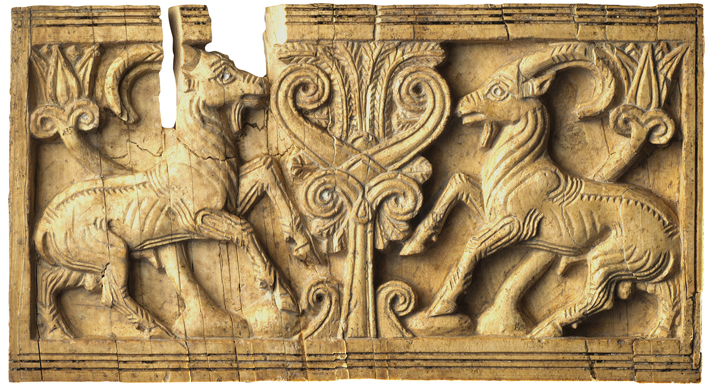 Often something handed down from generation to generation becomes your most treasured possession, be it your grandmother’s wedding ring, your grandfather’s WWII dog tags, or your mother’s silver. This ivory plaque was almost certainly such an heirloom. While the building in which it was discovered dates to the eighth century B.C., the plaque itself is at least 200 years older. The artifact was carved in a popular Near Eastern style called the Flame and Frond School, characterized by flame-like patterning on animals’ haunches—in this case two gamboling goats—and the presence of a tree in the center. This highly decorative motif is found on many ivory artifacts, most of which likely once decorated perishable items such as wooden furniture and boxes.

The plaque was discovered at Arslantepe, which was a fortified citadel enclosed by a massive defensive wall and which served as the capital of the Neo-Hittite kingdom of Melid at the beginning of the first millennium B.C. The Neo-Hittites lived in northern Syria and southern Anatolia from the end of the second millennium to around the eighth century B.C. The plaque is among the very few luxury items to have been found at Arslantepe. “This was a valuable imported object likely made in northern Syria that reached Arslantepe by a network of trade and communications between the surrounding kingdoms and empires,” says archaeologist Federico Manuelli of the Free University of Berlin. “The Flame and Frond motif suggests intriguing cross-cultural relationships with the Levant and Mesopotamian worlds, and the plaque might have been stored as a precious artifact with great symbolic and ideological meaning.”