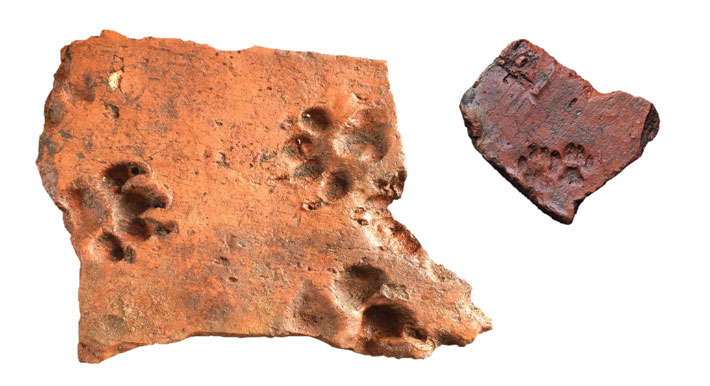 Next time you’re walking down a city sidewalk and see a dog’s paw print in the concrete, remember that, despite the passage of centuries or even millennia, the ancient and modern worlds are not nearly as different as you might think. Archaeologists working at a site called Blackfriars in Leicester, England, have recently found several clay roof and floor tiles with the prints of not only dogs, but also those of a cat and a sheep or goat, who all ran across the tiles as they were drying sometime in the second or third century A.D. While not an especially rare discovery, as such imprints have been unearthed at many Roman sites, “they are always a lovely find as they are such a unique snapshot into the past,” says project archaeologist Nick Daffern. “I think these kinds of finds bring the archaeology to life and give emotional engagement—you can imagine how the person reacted when they found their lovely batch of tiles had been disturbed.”

The animal prints are not the only evidence that the neighborhood’s ancient inhabitants shared many of the same obsessions as modern people. Daffern’s team identified, along with the stone foundation of a sizeable building dating to the second or third century, several phases of earlier, Late Iron Age/early Roman timber construction. According to Daffern, the site presents “an interesting mix” of high-status and utilitarian items. “There is almost a feeling of keeping up with the Joneses here,” he says. “They tried to develop the building from timber origins to a more impressive stone structure, but, for whatever reason, they couldn’t go all the way. The original masonry is very impressive, but some of the repairs and adjustments look botched, and we have even joked that maybe they encountered a Roman credit crunch!”