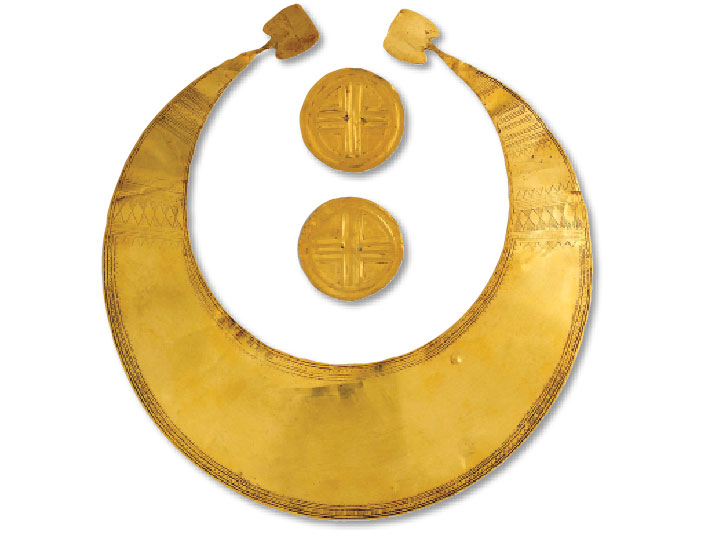 Gold has long played an important role in human societies. Its color, malleability, and resistance to corrosion have given it unequaled desirability for personal ornamentation and currency. In mainland Europe, the earliest evidence of goldworking dates back to more than 6,500 years ago in Bulgaria. For Ireland and Britain, it dates to about 2500 B.C., when early Bronze Age Irish craftsmen made great strides in metallurgy and demonstrated extraordinary skill in the production of gold artifacts.

By hammering gold into thin sheets and then forming it into objects such as sun disks, beads, oval plaques, and lunulas, or crescent-shaped neck ornaments decorated with geometric motifs, they created what were to become the most iconic gold artifacts of the early Irish Bronze Age (2200–1800 B.C.). Some 100 lunulas have been discovered by archaeologists, with more than 80 from Ireland alone, and much more early Bronze Age gold has been unearthed in Ireland than in nearby countries. Experts theorized, until recently, that Ireland was not only a center of gold production, but also, perhaps, a source of its unprocessed ore.

A recent study led by Christopher Standish from the University of Southampton has employed new scientific methods to analyze the provenance of Bronze Age Irish gold. His findings are beginning to overturn long-held assumptions. “Our lack of understanding of where the gold came from that was used for the manufacture of impressive ornaments found in Ireland has been a significant gap in our understanding of the Bronze Age in general,” he says. “Identifying which sources were exploited is vital if we want to recognize patterns of gold procurement, trade, and exchange, all of which help generate a fuller understanding of prehistoric societies, their economies, and the interactions between different groups.” 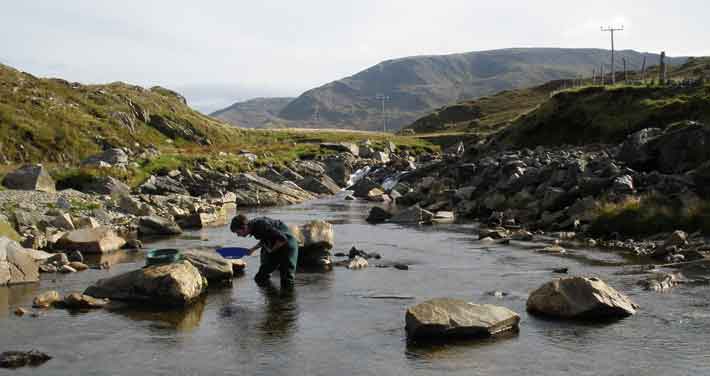 Standish’s team conducted lead-isotope and major-element analyses, which measure concentrations of tin, silver, and copper, on more than 50 early Bronze Age gold artifacts to match their elemental signatures to gold sources in Ireland. Surprisingly, the composition of the manufactured gold products did not match any known Irish gold sources, even though there are a number of locally accessible deposits. This could suggest that Irish Bronze Age communities were exploiting a currently unknown gold source or one that no longer exists. However, Standish’s analysis also compared the Irish objects with known gold deposits in Britain, France, and Iberia. The likely origin of Bronze Age Irish gold, it turns out, was Cornwall, in southwest England, a region known for exporting tin at the time. “This suggests that southwest Britain would have been an extremely important region during the Bronze Age, as local populations would have had the ability to control the supply of two of the key materials in use at this time,” explains Standish. The study indicates that during the late third millennium B.C., trade networks existed between Ireland and southwest England, with unprocessed gold ingots from Cornwall being exchanged for Irish goods and resources, principally copper.

But why would Irish communities go to the trouble of importing gold when they had local deposits available? Standish suggests that it might be due to the allure of objects from distant foreign lands. Imported gold would have demonstrated the prowess of an Irish chief—his ability to procure a precious resource from a faraway land—and the foreignness of the gold itself may have given it magical properties. “Gold sun disks and lunulas have both been linked to ideas of sun worship,” says Standish. “When discussed in terms of Bronze Age belief systems, it is easy to see how Irish societies would have preferred to make these objects out of an exotic, mystically charged material, which perhaps helps explain why local sources of gold may not have been desired.”