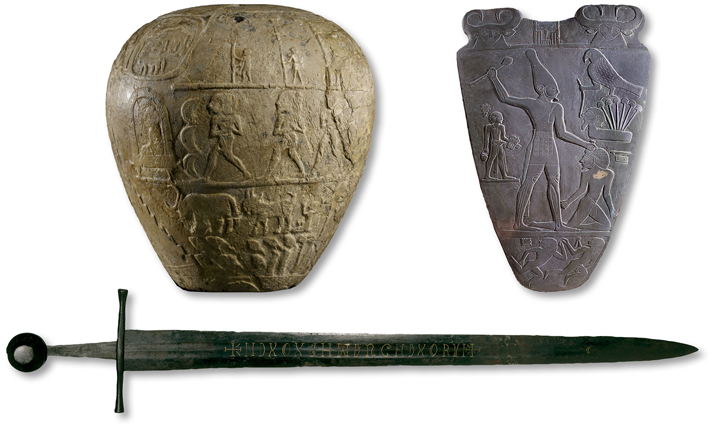 Weapons are, of course, instruments of violence. Occasionally, though, they assume symbolic importance that transcends their martial purpose and comes to represent the power and authority their possessors hold over others. At times, some ancient weapons were seen as mystical items, endowed with supernatural properties.

Maces were closely associated with the earliest Egyptian rulers. They could be used to crush an opponent’s skull in close combat but were also seen as important symbols of pharaohs’ strength and supremacy. Some ancient examples, such as the approximately 5,000-year-old mace-head of King Narmer, were not intended to be used in battle, but were explicitly designed to serve as ceremonial or votive objects. This mace-head was carved with scenes from Narmer’s life that emphasized his authority and the subjugation of his enemies.

In medieval Europe, some workshops attempted to imbue their swords with magical powers by inscribing the blades, as seen on a thirteenth-century weapon pulled from the Witham River in England. These often indecipherable messages, which include clearly Christian symbols, were presumably intended to invoke God’s protection in battle. They are part of a Germanic tradition dating to pre-Christian times in which magical runic symbols were etched onto blades.

The symbolic and supernatural nature of ancient weapons is perhaps best embodied by bone daggers that were widely used in New Guinea. Traditionally, these lethal objects were made from the leg bones of cassowary birds. In special circumstances, though, they could be shaped from the femur of a fallen adversary or a deceased relative. “Human bone daggers were rare,” says Dartmouth College anthropologist Nathaniel Dominy. “To possess one, a man had to have killed another man in combat or have appropriated his dead father’s femur.” Recent research has demonstrated that these human bone daggers were stronger than their cassowary counterparts. They were also evocative symbols of the ferocity and prowess of those who wielded them. “These weapons were filled with substantial strength,” says Dominy. “They were manifestations of spiritual power and allowed the owner to lay claim to the rights and powers of the man who had surrendered the bone.”