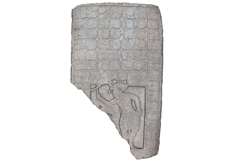 MEXICO: An inscribed stone tablet unearthed by a cattle rancher in Lacanja Tzeltal, Chiapas, has led to the discovery of a long-lost Maya city that was founded around 750 B.C. The existence of an important regional capital called Sak Tz’i’ was known from previously discovered inscriptions, but its exact location had eluded archaeologists for decades. When researchers explored the rancher’s property, they found a trove of monuments, including pyramids and a palace complex, and were able to identify the inscribed text that confirmed the site’s name.