During a turbulent period in ancient Egypt, common people turned to animal mummies to petition the gods, inspiring the rise of a massive religious industry 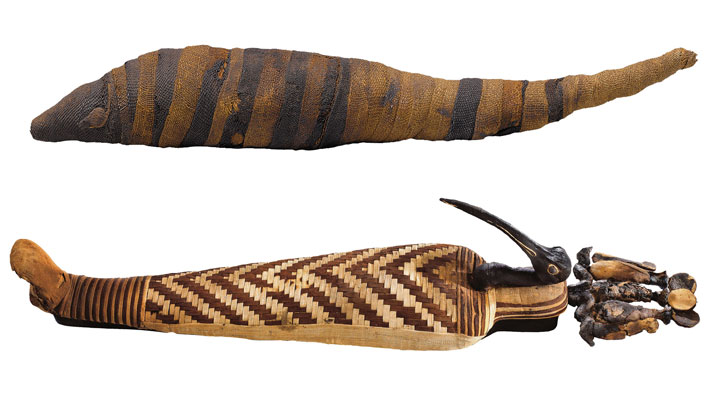 For decades, 30 boxes lay forgotten in the storage vaults of the Brooklyn Museum’s Egyptology department. The contents had not been catalogued, or even seen, since the 1930s and 40s, when they were purchased from the New-York Historical Society. But in 2009, curatorial assistant Kathy Zurek-Doule finally opened the boxes. Lying nestled inside each one was an elaborately wrapped mummy in the shape of an animal. Ibises, hawks, cats, dogs, snakes, and even a shrew were all represented in the collection, which had been amassed by a wealthy New York businessman in the mid-nineteenth century. Faced with an unexpected trove of objects unlike any other the museum has, Egyptology curator Edward Bleiberg and his team embarked on a comprehensive study of the mummies. The rediscovered objects gave Bleiberg the chance to investigate a question that has puzzled archaeologists ever since they first realized that vast animal cemeteries along the Nile hold millions of mummies: Why did the ancient Egyptians invest so much in the afterlife of creatures?

Unlike Greeks and Romans, ancient Egyptians believed animals possess a soul, or ba, just as humans do. “We forget how significant it is to ascribe a soul to an animal,” says Bleiberg. “For ancient Egyptians, animals were both physical and spiritual beings.” In fact, the ancient Egyptian language had no word for “animal” as a separate category until the spread of Christianity. Animal cults flourished outside the established state temples for much of Egyptian history and animals played a critical role in Egypt’s spiritual life. The gods themselves sometimes took animal form. Horus, the patron god of Egypt, was often portrayed with the head of a hawk; Thoth, the scribe god, was represented as an ibis or a baboon; and the fertility goddess Hathor was depicted as a cow. Even the pharaohs revered animals, and at least a few royal pets were mummified. In 1400 B.C., the pharaoh Amenhotep II went to the afterlife accompanied by his hunting dog, and a decade later his heir Thutmose IV was buried with a royal cat.

However, large numbers of mummies in dedicated animal necropolises did not appear until after the fall of the New Kingdom, around 1075 B.C. During the subsequent chaotic 400-year span known as the Third Intermediate Period, the central Egyptian state collapsed and a series of local dynasties and foreign kings rose and fell in rapid succession. This time is often depicted as calamitous in official accounts, but Bleiberg notes that during the First Intermediate Period, a similarly chaotic era without central authority that lasted from 2181 to 2055 B.C., life for the average Egyptian went on as normal. In fact, University of Cambridge Egyptologist Barry Kemp has shown that villagers were relatively prosperous during this time, perhaps because they paid taxes only to local authorities, and not to the central state. If life in the Third Intermediate Period was similar, then the average Egyptian may have had more disposable income. With no pharaoh to mediate Egypt’s relationship to the gods, and with foreigners undermining religious traditions, there was also a turn to personal piety among the general public. “Without the pharaoh, people needed to approach the gods on their own,” says Bleiberg. 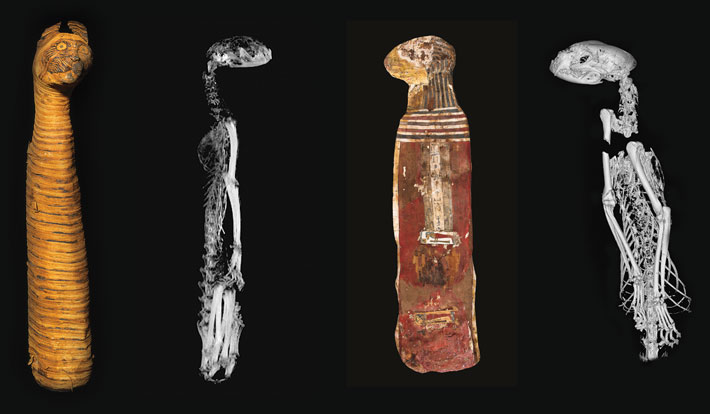 Against this backdrop, pilgrims visiting temples began to purchase animal mummies from priests to bury as votive offerings. Some wealthier pilgrims bought bronze statuettes of divinities that were also wrapped as mummies and placed in animal cemeteries. But real animal mummies would have been a much cheaper option, and they were soon a pervasive presence in Egyptian life. Salima Ikram of the American University in Cairo estimates that the known 31 animal necropolises once held at least 20 million mummies. According to an ancient text, the Temple of Thoth in the necropolis of Saqqara at one time had 60,000 living ibises being readied for mummification, and archaeologists estimate that some four million ibis mummies were eventually buried there. A few mummies have been found with papyri petitioning the gods for help to resolve a family matter or cure an illness. Bleiberg notes, however, that the majority of animal mummies were not accompanied by written petitions and that it’s possible most were intended to carry oral messages. Perhaps pilgrims whispered their requests in the ears of the mummies, which then delivered their messages to the gods. 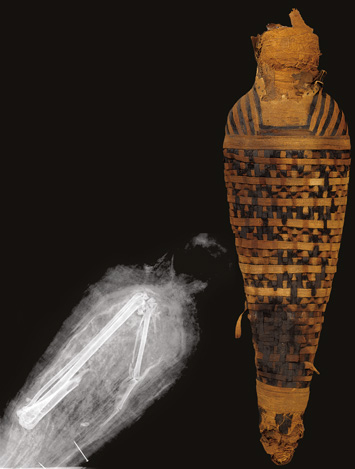 X-rays and CT scans of the mummies in the rediscovered Brooklyn Museum collection reveal just how diverse animal mummies could be. While many show entire skeletons inside the mummy bundles, others reveal only partial remains. Some even show multiple animals mummified together in one bundle. A particularly poignant CT scan of a cat bundle shows that the feline was mummified with its forepaws crossed in the same position as human mummies’ arms were crossed, a reminder that the ancient Egyptians drew little distinction between people and animals. To determine if different wrapping styles could be dated to particular periods, Bleiberg took radiocarbon samples of some of the mummies’ linens, but the dates turned out to be inconsistent. It’s possible that the linen used in the wrappings was often recycled, which makes dating unreliable. A piece of linen could begin life as an article of clothing that lasted for decades, then be used as a rag, and then be repurposed as mummy wrapping, perhaps decades, or even centuries, after it was first made. Given the scale of the animal mummy-making business, some temples may have made their own linen, just as they raised their own animals in numbers approaching modern-day industrial farming. “This was an extremely important economic phenomenon,” says Bleiberg. “ There was a lot of money being directed toward animal mummies in first millennium.” 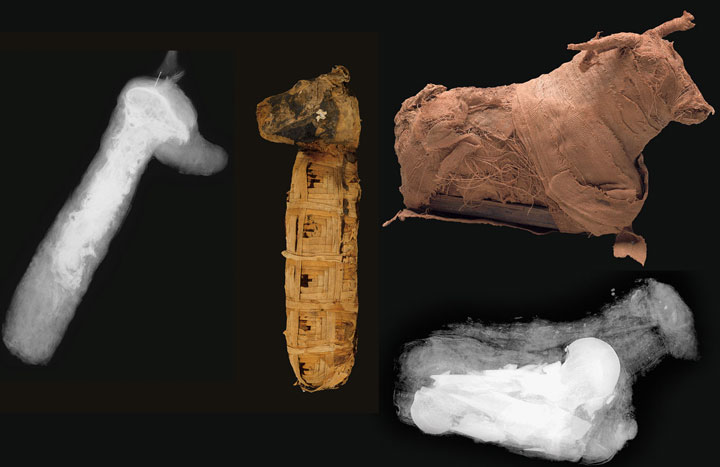 As with any large-scale business, the production of animal mummies could be rife with corruption. At the necropolis of Saqqara, Egyptologists discovered a draft document written on ostraca, or potsherds, that details a case of corruption against the Temple of Thoth. Though the exact charges are not translatable, they evidently had to do with payments worshippers made for animal mummies—and what they actually got in return. The document outlines reforms that call for “one god in one jar,” meaning one whole animal per purchase. That implies the priests of Thoth were selling fraudulent mummies that either had no animal inside at all, or held multiple animals that each represented a separate purchase. Whatever their crime, six priests were imprisoned. The document also describes a program of oversight by outside priests and states that, in the future, mummies would be stored in a holding area until they could be buried all at once during an annual festival overseen by reliable officials. 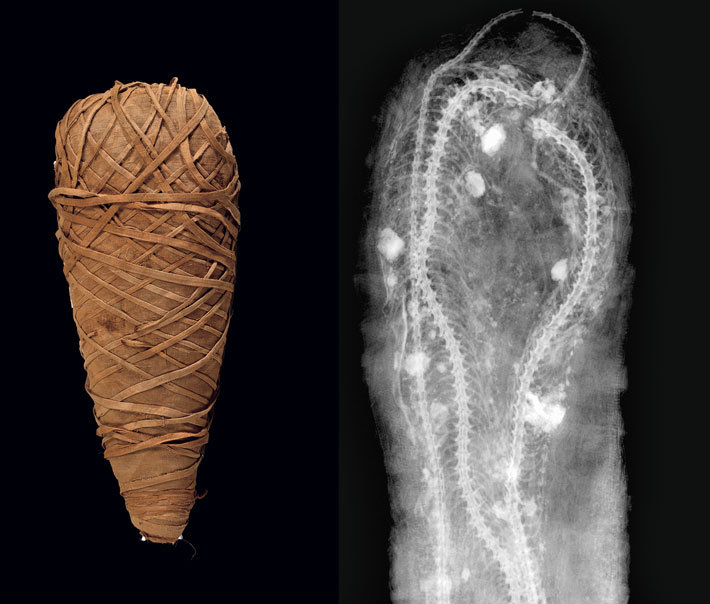 Some of the mummies in the Brooklyn Museum collection may have been the result of such corrupt practices. X-rays reveal multiple snakes in an “ibis” mummy, as well as mummy bundles without any remains, perhaps intended to fool unsuspecting worshippers. One mummy contained nothing but feathers, but was unusually well wrapped. Why would a corrupt priest bent on swindling a pilgrim devote so much time to elegantly wrapping a fraudulent mummy? “It’s possible the feathers came from an unusually important bird,” says Bleiberg, “We’ll never know for sure.” Although animal mummies were one of the most common classes of object left behind by the ancient Egyptians, they carry messages that may never be fully understood.

Eric A. Powell is online editor at Archaeology. For information on the traveling exhibit Soulful Creatures: Animal Mummies in Ancient Egypt, go to brooklynmuseum.org. The exhibit’s catalogue is available in bookstores and at gilesltd.com 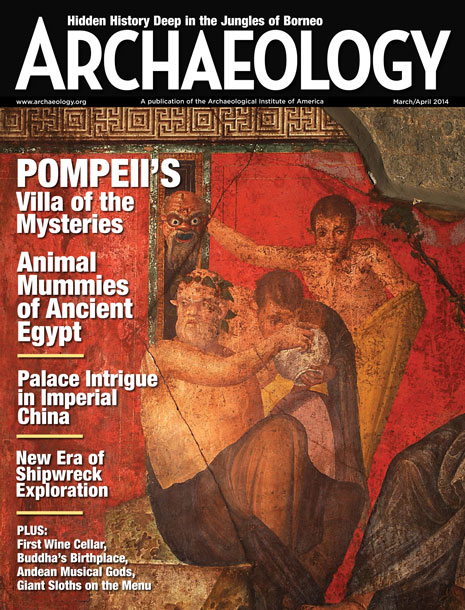 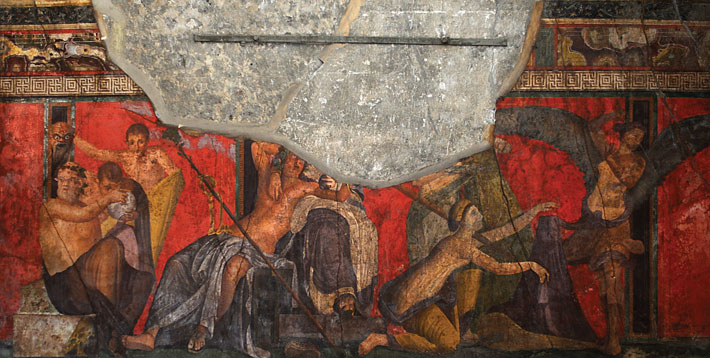