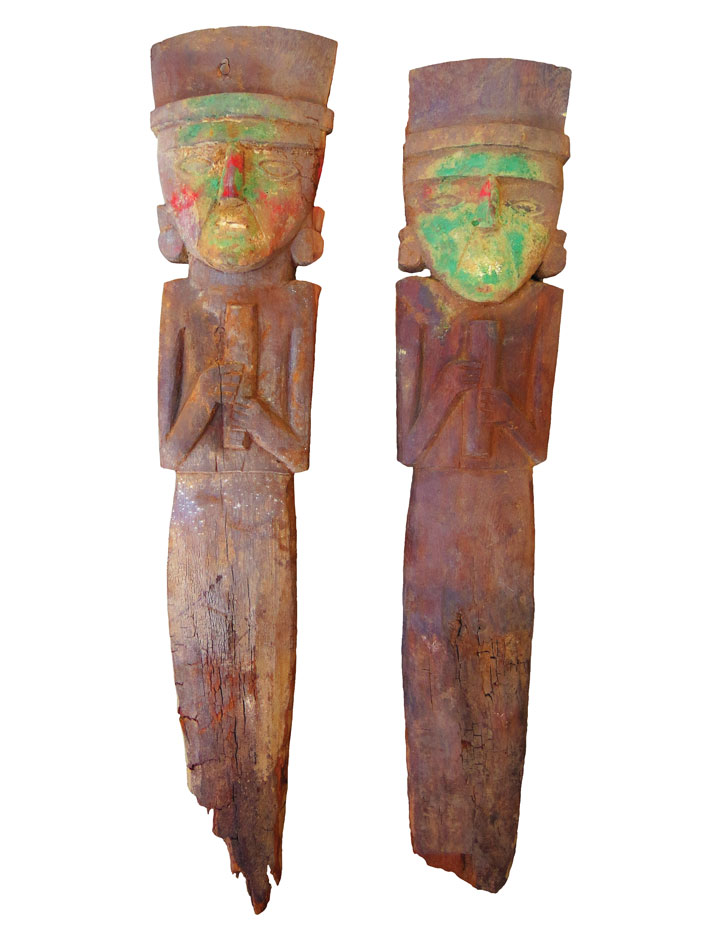 Music was an essential part of life for the ancient cultures of the Andes. It filled homes and accompanied political events and religious rituals. In the extensive subterranean tomb of several elite members of Peru’s Chimú culture, archaeologist Matthew Helmer of the University of East Anglia has found two remarkable wooden sculptures that demonstrate that music was as important in death as it was in life. The sculptures depict male musicians. Their distinctive cheeks and noses were once highlighted with cinnabar, and white paint was used in their mouths to represent teeth. They once wore copper masks, likely removed by looters, which left green residue on their faces. The musicians’ flutes are identical to 16 bamboo flutes archaeologists found in the tomb alongside a large collection of weaving tools and fine pottery. One outstanding vessel depicting the Chimú goddess of the moon, weavers, and the sea, taken together with the instruments, suggests that the tomb belonged to a group of noble musicians and weavers. Helmer believes that the figurines, which are unfinished at the bottom, were placed as stakes in the tomb floor, possibly to guard the entrance. Similar figurines have been found in other Chimú tombs—cupbearers, litter carriers, warriors, prisoners, and even rulers—and it is likely that they represented actual funerary events. “One can imagine that the sculptures commemorated a final musical ceremony for the musically oriented elite occupants of the tomb,” says Helmer, “and that they may have been intended to carry over as mythical musicians in the afterlife.”