Carved into the chalk of a hillside in southern England, the Uffington White Horse is utterly unique. Stretching 360 feet from head to tail, it is the only prehistoric geoglyph—a large-scale design created using elements of the natural landscape—known in Europe. “There’s just nothing like it,” says University of Southampton archaeologist Joshua Pollard, who points to the Nazca lines in Peru as the closest parallel. Pollard says that because the site is so anomalous, researchers have resisted grappling with its distinct nature. As a consequence, few new interpretations of the site have been advanced since the early twentieth century. “Archaeologists are tripped up by things that are unique,” says Pollard, “and the White Horse has thrown us.” But now, after making a close study of the site and its relationship to the landscape around it, Pollard has developed a theory that connects the Uffington Horse with an ancient mythological tradition.

Stories about the White Horse have been recorded since medieval times. One popular legend had it being carved in celebration of an Anglo-Saxon victory over a Viking army in A.D. 875. But excavations in the 1990s yielded dates that showed it was created much earlier, during the Late Bronze Age or the Iron Age, sometime between 1380 and 550 B.C. Most archaeologists have thought that the site was probably a symbol that signaled a prehistoric group’s ownership of the land—their attempt at creating a landmark that was meant to impress outsiders. But Pollard did not find that idea wholly persuasive. “It doesn’t really work that way,” he says. “For one, the way it’s positioned makes it difficult to see the whole geoglyph from the surrounding landscape.” Pollard found that there are other hillside locations in the immediate vicinity that are much more visible, and where creating a totemic image meant to symbolize a group’s identity would have made more sense.

Pollard usually works on sites dating to the Neolithic, a period when people erected large monuments, such as Stonehenge, that were often aligned with astronomical events. That experience led him to wonder if the Uffington Horse could have been designed along similar lines, and he investigated how the geoglyph was positioned relative to celestial bodies. He found that when observed from a hill opposite, in midwinter, the sun rises behind the horse, and as the day progresses, seems to gain on the horse and finally pass it. From the same vantage point, at all times of the year, the horse appears to be galloping along the ridge in a westerly direction, toward the sunset. 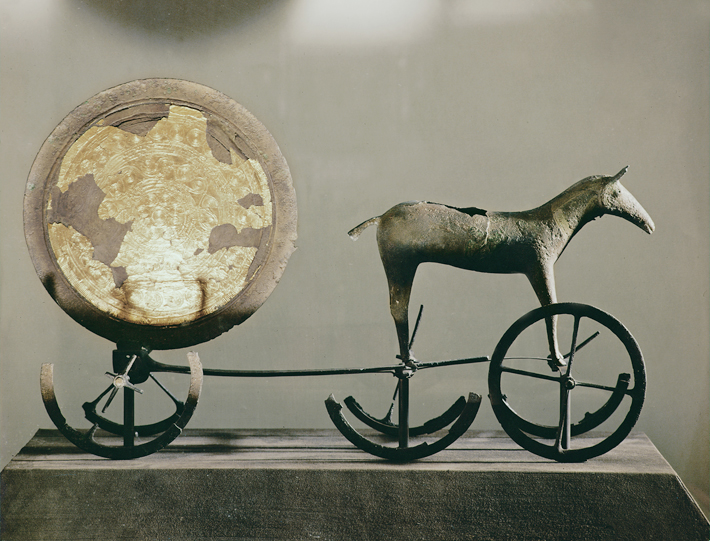 Both the form and the setting of the site led Pollard to conclude that the White Horse was originally created as a depiction of a “solar horse,” a creature found in the mythology of many ancient Indo-European cultures. These people believed that the sun either rode a horse or was drawn by one in a chariot across the sky. Depictions of horses drawing this so-called solar chariot have been unearthed in Scandinavia, and Celtic coins often show horses associated with the sun. “The White Horse is depicted as a horse in motion, and the people who created it must have thought that it was responsible for the sun’s movement across the sky,” says Pollard. He posits that the geoglyph was not a static symbol, but an animated creature on the landscape, one that connected ancient Britons with the sun. “I’ve always wondered why it seems the White Horse was meant to be seen from the sky,” says Alistair Barclay of Wessex Archaeology, who was a member of the team that worked at the site in the 1990s. “I think this explanation—that it is tied to the sun—makes sense.”

Over time, though its original purpose was lost, local people maintained a connection with the White Horse that ensured its continued existence. “If it weren’t maintained, the White Horse would be overgrown and disappear in 20 years,” says Andrew Foley, a ranger with the National Trust, which oversees the site. Historical records indicate the local community has long held regular festivals devoted to maintaining the site. In 1854, some 30,000 people attended. Now, each summer, a few hundred local volunteers weed the White Horse and then crush fresh chalk on top of it so that it keeps the same brilliant white appearance it has had for 3,000 years. The site, as it must have throughout millennia, continues to be meaningful to the people around it.