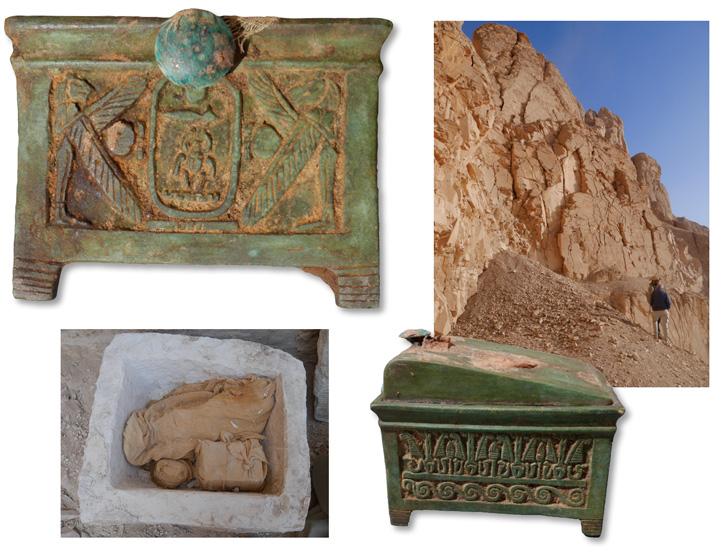 Archaeologists excavating in the Egyptian royal necropolis of Deir el-Bahari, on the west bank of the Nile, believe they have found the long-sought location of the tomb of the early 18th Dynasty pharaoh Thutmose II (r. ca. 1492–1479 B.C.). Near a chapel dedicated to the pharaoh that was part of the temple of his son and successor, Thutmose III (r. ca. 1479–1425 B.C.), the researchers uncovered a range of items that may have been part of a foundation deposit commemorating the tomb’s construction.

Beneath some 10 feet of rubble and slate dust, the team, led by Andrzej Niwiński of the University of Warsaw’s Institute of Archaeology, discovered a stone chest containing the remains of a goose, a goose egg, and an ibis egg—each wrapped separately in linen. They also uncovered a small temple-shaped faience chest that held a scarab wrapped in linen. The sema-tawy symbol representing the unification of Upper and Lower Egypt is carved on the chest’s lid, and Thutmose II’s cartouche is carved on its front. “All the elements of the deposit allude to the last two titles and names of Thutmose II,” Niwiński says. One of these titles, he explains, was “Son of Ra,” and the hieroglyph used to represent the word “son” is in the shape of a goose egg, while the word “goose” in ancient Egyptian sounds similar to the word for “Ra,” the sun deity. The pharaoh’s throne name, Thutmose, which appears in his cartouche, translates to “Thoth is born,” and Thoth, the god of writing, magic, and wisdom, is represented by an ibis in hieroglyphic script. Niwiński speculates that the pharaoh’s tomb is beneath a large accumulation of rubble that lies between the foundation deposit and the chapel dedicated to Thutmose II that is part of the temple of Thutmose III.