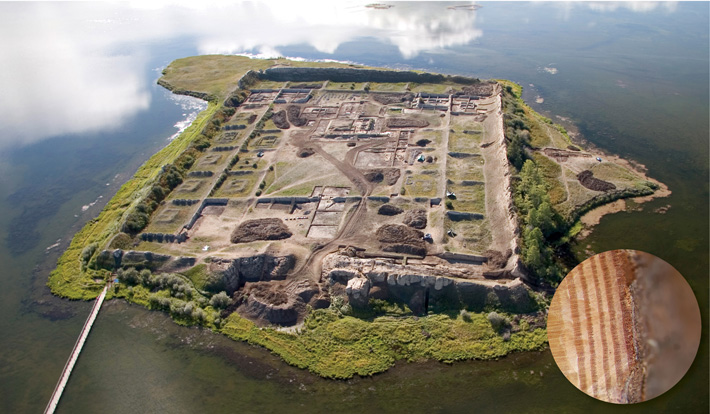 It’s hard to imagine that a tiny tree ring could help solve one of the medieval world’s most puzzling mysteries. But by applying the familiar technique of radiocarbon dating in a novel way, scholars have been able to answer the confounding question of why no one ever lived in, or even used, a striking complex of buildings at a site in the Tuva Republic called Por-Bajin.

Por-Bajin, or “Clay House” in Tuvan, is located on an island more than 4,000 feet above sea level in southern Siberia’s Lake Tere-Khol. Archaeological explorations of the site started in the late nineteenth century and an extensive research project has taken place there since 2007. It was known from the recent excavations that the 700-by-530-foot complex was constructed by a Uighur khan in a short time, probably a span of two years, in the eighth century A.D. But there has never been a consensus as to which ruler commissioned the complex—or even what its function was. It seemed an ideal place to test something new.

In 2012, Japanese scientist Fusa Miyake identified two spikes in the carbon-14 levels present in tree rings of known age from dendrochronological archives—one in 775, and the other in 994. These surges, now called Miyake Events, were likely produced by massive bursts of cosmic radiation and can be seen in tree rings throughout the world. Por-Bajin was originally thought to have been built in 750 by Bayan-Chur Khan (r. 747–759), ruler of the Uighur Khaganate, and his Chinese princess wife. But this date, as well as the identification of the site as a palace, was based on an inscription found elsewhere. Earlier efforts at radiocarbon dating the larch beams that supported the clay structures were frustratingly inexact. “The problem with routine radiocarbon is precision,” says archaeologist Margot Kuitems of the University of Groningen. “You always end up with a range, usually a few decades. For some periods or monuments this may not matter as much, but for Por-Bajin, with all the questions surrounding it, you really do want to know when, exactly, it was built.” 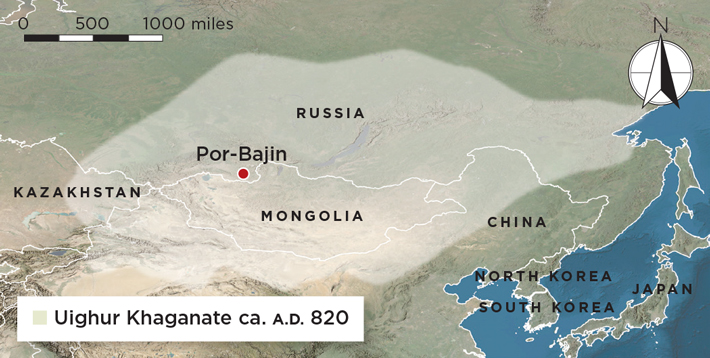 Kuitems was able to identify a Miyake Event in the forty-third ring of one of the wooden beams, but the real excitement came when she saw that it was only two rings away from the final ring, meaning that she could confidently conclude that the tree had been felled in 777. She was even able to determine that the tree had been cut down during a warm season, likely the spring, because the ring consisted only of so-called early wood, which is not formed during cold Siberian winters.

Sometime before 777, the Uighur ruler Tengri Bögü Khan (r. 759–779), Bayan-Chur Khan’s son, changed the Khaganate’s official religion from Tengrism, a shamanistic tradition, to the Gnostic faith of Manichaeism. In 777, the researchers’ findings establish, he began construction of Por-Bajin.

The khan’s conversion was to be his downfall—in 779, he was assassinated during an anti-Manichaean uprising. Based on the precise date of the complex and the fact that it showed no signs of ever having been occupied or used, archaeologists now believe that Por-Bajin was not, in fact, a palace at all, but a Manichaean monastery that was abandoned after Tengri Bögü Khan’s death and the Khaganate’s return to Tengrism. “We began our research hoping to achieve a proof of concept,” says Kuitems. “We didn’t expect to be able to solve a mystery with science.”