When archaeologists excavating a large third- to fifth-century A.D. cemetery in the ancient Roman city of Augustodunum (modern Autun, France) found an extremely rare and incalculably valuable Roman glass vessel in the stone sarcophagus of one of the city’s wealthiest citizens, they were stunned by its remarkable state of preservation. (See “Gaul’s University Town.") Though the cup was discovered in many pieces, its fragments were well enough preserved to easily make out its decorative patterns and to read its inscription, “VIVAS FELICITER,” or “Live happily.” Only 10 examples of this type of vessel, known as a cage cup, have survived from antiquity. 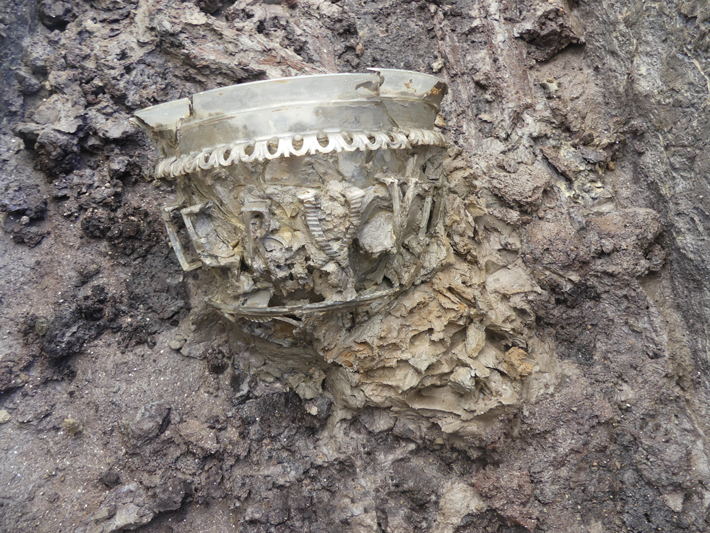 After they were unearthed, the cup’s fragments were sent to Germany for restoration, a multiyear process that has revealed new details about this extraordinary artifact. It is clear that while the artist who carved the cup from a block of glass was extremely skilled, they nevertheless made a mistake that required them to add the letter “C” in the inscription later using a remelted piece of glass.

Conservators also sampled the interior of the cup and found that it had once contained oils, plants, flowers, and ambergris, a rare waxy substance from the stomach contents of sperm whales. Ambergris, also called “sea truffle” or “whale vomit,” served in antiquity as a base for perfume, food, and medicine. The Augustodunum cage cup provides the earliest archaeological evidence for use of this highly prized material. To see an additional image of the restored cage cup, click here.