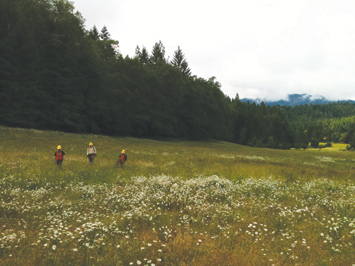 In the remote mountains of southwestern Oregon, researchers have uncovered a pre–Civil War battlefield that was lost for more than a century and a half. The Battle of Hungry Hill was a pivotal fight during the Rogue River Wars of 1855 to 1856, a conflict between Oregon settlers and Native Americans. The battle, a defeat for the U.S. Army and a local militia, prompted the government to evict the native population from Oregon’s Rogue and Umpqua Valleys.

For years, pioneer family stories led researchers searching for evidence of the battle in the wrong direction. However, archaeological surveys, according to Mark Tveskov, an archaeologist with Southern Oregon University, eventually identified the location where it had been fought. During the research, which began in 2009, Tveskov found previously unknown primary documentation, including a front-page article in the New York Herald, published 12 days after the battle concluded on October 31, 1855, and eyewitness accounts. This led the team to 24 square miles of the Grave Creek Hills, several miles northwest of the spot where the battle was previously thought to have taken place.

In September, the team turned up three artifacts that match weaponry used by the U.S. Army during the mid-nineteenth century—two .69 caliber lead musketballs and a lead stopper from a gunpowder container. Tveskov hopes to uncover more details, which might, among other things, corroborate two historical accounts of a Native American sniper picking off the majority of the Army’s 39 casualties.