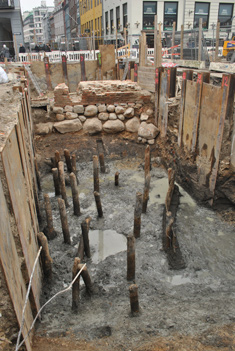 Kongens Nytorv, a major square in Copenhagen, has offered evidence of a dark chapter in the exploration of the northern latitudes, according to Jens Winter Johannsen, an archaeologist at the Museum of Copenhagen. Excavations in the square uncovered a piece of a Thule bird spear from Greenland in what was once a moat around the city. There is one obvious way the seventeenth-century spear prong could have made it across the North Atlantic: kidnapping. It wasn’t uncommon for European explorers to bring home natives, often against their will, as novelties or to prove tales of discovery. The fragment, made of bone, could have been a mariner’s souvenir, but also could have belonged to one of the 19 Greenlanders known to have been forcibly kidnapped by Danes that century. According to Johannsen, “The small implement found at Kongens Nytorv thus illustrates a cruel story of some of the consequences of Danish ambitions as a great power.”