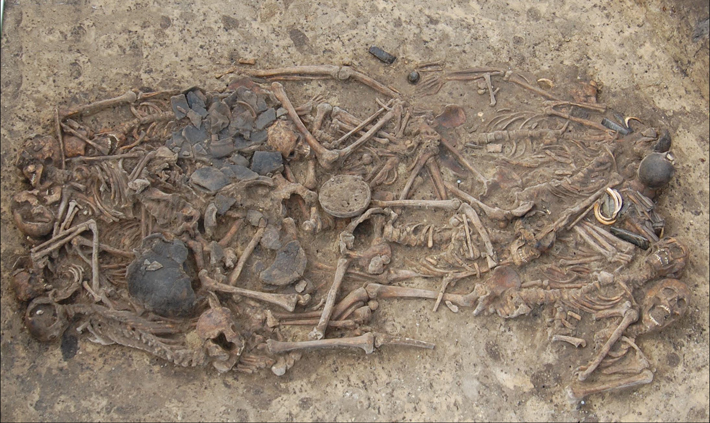 Fifteen people who were killed in a brutal massacre almost 5,000 years ago and buried together in southern Poland were part of an extended family, genetic analysis has revealed. “The people’s bodies are carefully arranged according to family relationships—mothers are next to their children, and brothers are close to each other,” says Hannes Schroeder, an ancient DNA specialist at the University of Copenhagen. “This shows that they were buried by people who knew them well, most likely by relatives.” Given that adult males are largely missing from the grave, Schroeder adds, they may have been the ones who performed the burial.

The genetic analysis also showed that all the males in the burial were from a single male lineage, whereas the women and girls were from six different female lineages. This suggests that the family, which belonged to a Neolithic farming culture called the Globular Amphora Culture, was patrilineal, with women leaving their own families to join their male partners. The massacre may have occurred as the result of tensions caused by an influx of pastoralists from the steppes to the east. “We have no way of saying who did the killing,” says Schroeder, “but when you have increased competition for resources it tends to lead to conflict.”