King for a day? How about emperor for two months? Between A.D. 260 and 274, a succession of generals ruled over the Gallic Empire, a breakaway state from the Roman Empire that included the provinces of Germania, Gaul, Britannia, and, briefly, Hispania. In the spring of A.D. 269, having fended off a Germanic invasion, the military commander Ulpius Cornelius Laelianus declared himself Gallic emperor at Moguntiacum (modern Mainz), the capital of the province of Germania Superior. His reign would not survive the season.

Save for a mention in the Historia Augusta, a collection of biographies of the Roman emperors written hundreds of years after his reign, Laelianus is largely lost to history. The ill-fated ruler—who appears to have been assassinated by his own troops—is known primarily through the coins he managed to mint despite his brief reign. Thus, the recent discovery of a Laelianus coin during excavations at a small Roman farmstead on the outskirts of Cambridge adds a very short chapter to the enigmatic emperor’s tale. On the front of the coin, Laelianus wears a crown and is surrounded by a phrase identifying him as emperor. The reverse shows a personification of Victory holding a palm frond and wreath meant to proclaim Laelianus’ military prowess. “Many rulers, including Roman emperors, have struck coins to proclaim their position as head of state,” says Julian Bowsher, numismatist at MOLA Headland, which conducted the excavation. “It’s probable that a usurper like Laelianus did so in part to establish his credibility in contrast to his predecessors.” 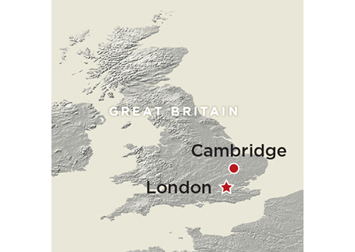 Although Gallic coins were quite common in Britannia, having been brought over in bulk when the province was part of the Gallic Empire, coins struck by Laelianus are very rare, explains Bowsher. Only about 50 such coins have been found on the island. Equally rare are coins struck by one of Laelianus’ slightly more fortunate successors, a former blacksmith named Marcus Aurelius Marius, who lasted a full three months before he, too, was assassinated.