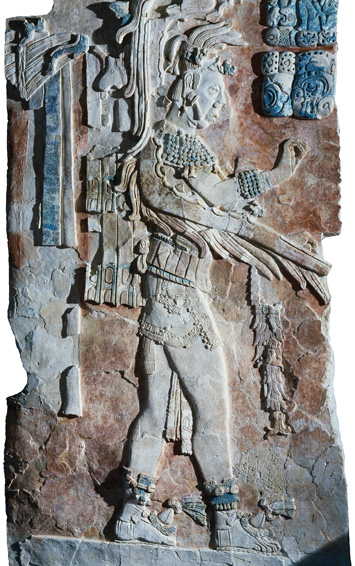 Maya sandals, which were typically reserved for use during travel and ceremonial events, ranged from simple, functional forms to ornate footwear that may have been used exclusively in specific contexts. An example of the latter is found in a Late Classic (A.D. 600–900) stucco panel from a temple at Palenque depicting an individual named Upakal K’inich. A caption on the panel refers to him as a baah ch’ok, or royal heir, and he is shown wearing an elaborate avian costume as he performs a ceremony. The soles of Upakal K’inich’s sandals appear to have been woven, likely from reed or henequen fibers. An ornamental fastener on the bridge of the foot, which holds each sandal in place, is ringed by blue feathers at its base. More blue feathers sprout from the fastener’s top. A leg wrap surrounding Upakal K’inich’s lower calf also features blue feathers, and over the wrap is a woven strap with shell or clay bells, which would have tinkled with each twitch of the leg. “Like many items of ceremonial dress, elaborate sandals such as these were intended to be eyecatching, full of motion, color, and sound,” says archaeologist Franco Rossi, currently a fellow at Brown University’s John Carter Brown Library.

Ornate Maya sandals were often made from jaguar skins, and, in some cases, complete jaguar paws or bird claws—either real or replica—were incorporated into the footwear. Sandals could also be decorated with turtle shells that would make rattling noises to draw viewers’ attention to a performer. Other examples had wooden soles or heels, and some even included stilts, that elevated the wearer.