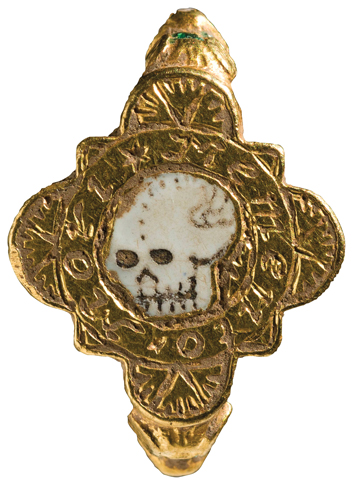 Rings can have many meanings. They can be tokens of friendship, badges of wealth, markers of membership, or symbols of union. Unlike many other pieces of jewelry, which are viewed only when looking in a mirror, people can see their rings while they go about their daily business, whether writing a poem or stirring the sauce for dinner. Rings are ever-present reminders of what they symbolize. 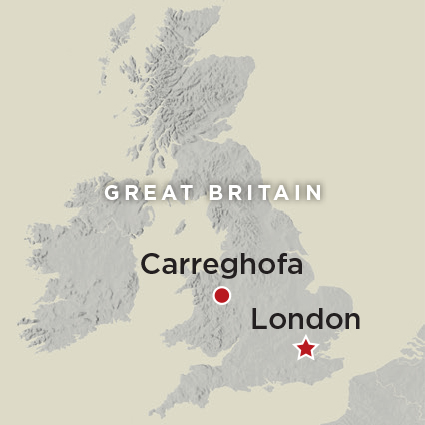 For the owner of this ring, newly unearthed near Carreghofa Castle in northern Wales, and others who saw it, the meaning of the enameled skull and italic inscription, memento mori (“remember you must die”), would have been clear. “The motif and inscription would acknowledge and remind them of the brevity and vanities of life,” says archaeologist Mark Redknap of National Museum Wales. The skull and skeleton were used in late medieval and Renaissance art and literature to emphasize human mortality, explains Redknap. “The ring, with its symbolism and the admonitory inscription, was an expression of the sentiment in the style of the period,” he says.

While the sentiment may have been common enough, the ring is not. “It is the first example of this type of enameled ring with a clear Welsh provenance in terms of where it was lost,” says Redknap. “This period saw the rise of a Welsh gentry and the ring is high quality. We can assume the owner was comparatively wealthy, even if we cannot establish who exactly he was.” Memento mori inscriptions, which also appear in mosaics, book illustrations, and many other art forms from this period, were intended not only to remind one of the inevitability of death, but also to carpe diem, or seize the day.