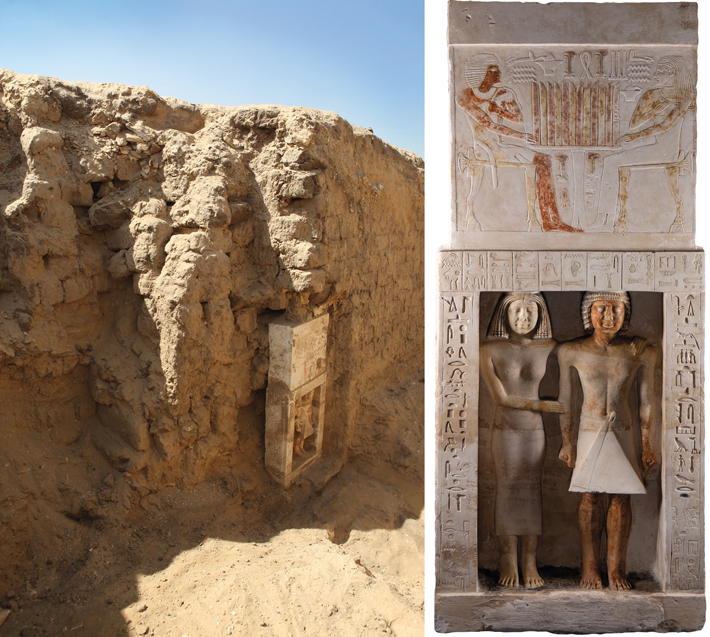 During excavations at the necropolis of Abusir, Egyptologists discovered an unusual funerary monument embedded in an Old Kingdom mudbrick mastaba tomb dating to the 4th Dynasty (ca. 2575–2465 B.C.). The recently uncovered stela, however, dates to the first half of the 5th Dynasty (ca. 2465–2323 B.C.) and memorializes a scribe of the treasury named Sekhemka and his wife Henutsen. “Sekhemka was probably a rather low-level official and died much younger than expected,” says Egyptologist Martin Odler of Charles University. This may be why an older tomb was reused.

The white limestone stela is 3.5 feet tall and 1.5 feet wide and depicts the couple standing in a doorway. In a relief atop the doorway, the pair is seated at an offering table covered with 12 loaves of bread. Hieroglyphic inscriptions around the table indicate that Sekhemka and Henutsen should fare well in the afterlife. These inscriptions suggest they would ideally be buried with lighted incense, 1,000 pieces of alabaster, 1,000 pieces of linen, 1,000 loaves of bread, and 1,000 jars of beer, as well as seven sacred oils, including the “best cedar oil” and other, less easily identifiable substances such as “festive oil.”

The offering scene, doorway, and hieroglyphs surrounding the figures were all once painted in rich shades of red, yellow, blue, green, and black. A surprising amount of the pigment survives. Aside from the rarity of preserved paint, Odler explains that the stela is significant because it combines well-known elements of funerary monuments in a completely unique way. “The stela shows that our knowledge of the Old Kingdom is limited,” he says. “We can still find unexpected artifacts that make Old Kingdom Egyptians more human and more creative than expected.”