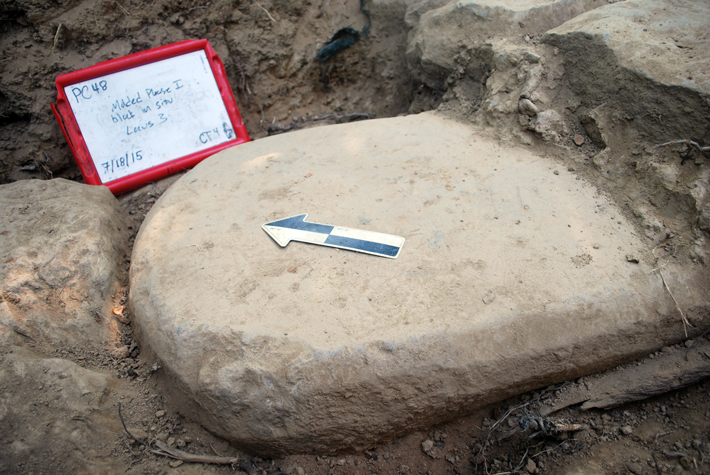 An inscribed stone slab unearthed at an Etruscan site in Tuscany is proving to contain one of the most difficult texts to decipher. It was believed that the sixth-century B.C. stela would shed light on the still-mysterious Etruscan language, but so far it remains a puzzle. “To be honest, I’m not yet sure what type of text was incised on the stela,” says Rex Wallace, professor of classics at the University of Massachusetts. Inscribed with vertical dots and at least 70 legible letters, the four-foot-tall and two-foot-wide slab had been buried for more than 2,500 years in the foundations of a monumental temple at Poggio Colla, some 22 miles northeast of Florence in the Mugello Valley. Archaeologists speculate that the text, written right to left, may refer to a goddess who was worshiped at the site, but so far no name of any god or goddess has been found. “The inscription is divided into words by means of three vertically aligned dots, so it’s possible to identify some of the word forms in the text,” Wallace says. “Unfortunately, most of the words that have been identified, apart from the numeral ki, ‘three,’ appear to be new additions to the Etruscan lexicon and we can’t yet pinpoint the meanings,” he adds.

One of antiquity’s great enigmas, the Etruscans began to flourish around 900 B.C., and dominated much of Italy for five centuries. By around 300 to 100 B.C., they were absorbed into the Roman Empire. Their non-Indo-European language eventually died out, and much of what we know comes from short funerary inscriptions. “Now we are adding another example to the inventory of texts that aren’t short and formulaic,” Wallace explains. “However, this means it will be very difficult to interpret, for that very reason.”