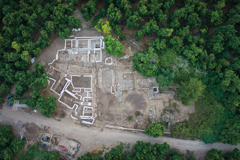 ISRAEL: The abrupt end of the Bronze Age site of Tel Kabri has long puzzled archaeologists. The Canaanite settlement was one of the most prosperous in the region between 1900 and 1700 B.C., before it was suddenly abandoned. New clues as to what might have happened were recently found during investigation of a 100-foot-long trench that traverses the site. The ditch was originally thought to have been a modern intrusion, but new analysis indicates that it is actually a rupture formed during a massive ancient earthquake that probably left the city irreparably damaged.