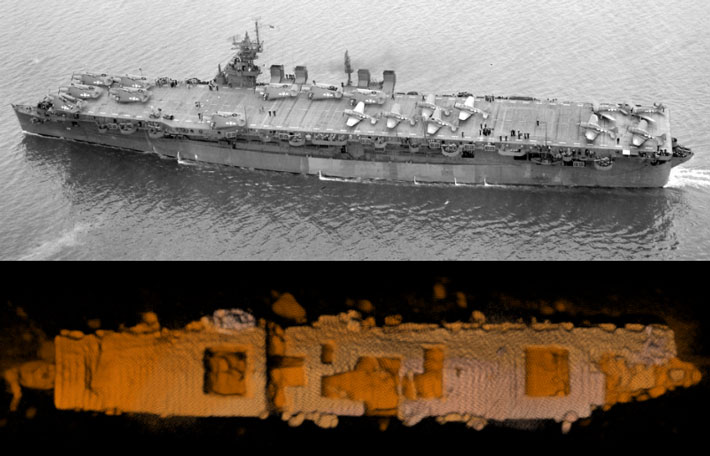 If there’s a single ship that reflects the changing nature of warfare in the mid-twentieth century, it might be USS Independence. The National Oceanic and Atmospheric Administration, working with technology partners Boeing and CodaOctopus, recently discovered and surveyed its wreck in 2,600 feet of water near California’s Farallon Islands. Independence began life as a light cruiser in 1941, and was converted to a light aircraft carrier before it was officially launched the next year. The ship saw heavy action all over the Pacific throughout World War II. After that, it became part of Operation Crossroads, the secret atomic bomb tests at Bikini Atoll in 1946, as one of more than 90 ships that were a “target fleet” to assess the impact of the blasts. Two detonations later, Independence, damaged but in one piece, was towed back to San Francisco for decontamination and study, and then finally scuttled during weapons tests in 1951. The wreck is amazingly intact, with the openings for aircraft elevators—one of which may contain an aircraft—clearly identifiable. 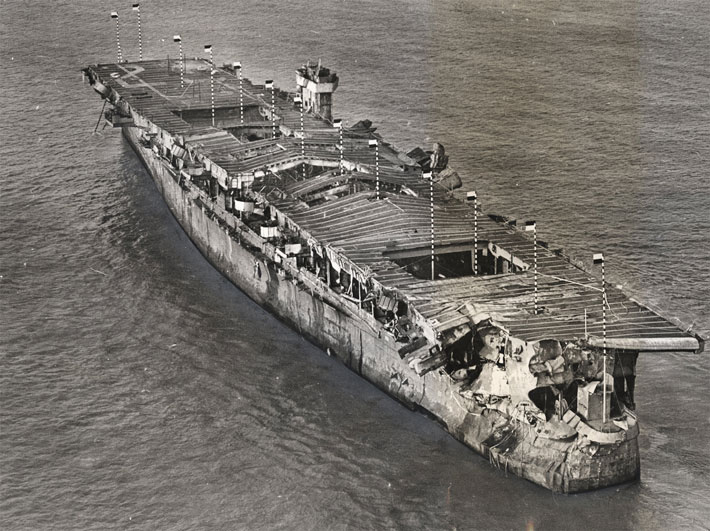 Independence and its aircraft had taken part in the Battle of Leyte Gulf in October 1944, considered by some the largest naval battle in history. One engagement of that battle, the Battle of the Sibuyan Sea, resulted in the sinking of the Japanese super-battleship Musashi. Even as the wreck of Independence was found, billionaire cofounder of Microsoft Paul Allen successfully concluded his independent eight-year search for the wreck of Musashi in Philippine waters. It was one of the heaviest and most technologically advanced warships of its time—though not quite as advanced as M/Y Octopus, Allen’s yacht, which was used to launch the autonomous underwater vehicle that found the battleship and the remotely operated vehicle that beamed back the first pictures and videos.